Is there still such a thing as PRIZE money?  When I was a young sailor, I used to hear about SALVAGE money.  Is that  still extant and how much does each member of the crew get?

Both questions can be answered by the following document.

{1}  The distribution of prize money [other than salvage awards] is regulated by Order in Council of the 27th April, 1918.

{2}  The distribution of salvage awards is regulated by Order in Council of the 18th December, 1936 as follows:-

At the Court of Buckingham Palace,
The 18th day of December, 1936

The King's Most Excellent Majesty in Council.
Whereas there was this day read at the Board a Memorial from the Right Honourable the Lords Commissioners of the Admiralty, dated the 19th day of November, 1936 [N.L.1344/36] in the words following, viz:-

1.  The net amount distributable shall be distributed by Classes, so that every person present and assisting shall receive shares according to his Class, or according to equivalent Ranks and Ratings as set forth in the following scale, the equivalent Ranks and Ratings being those laid down in Your Majesty's Regulations and Admiralty Instructions for the Government of Your Majesty's Naval Service, and in the Regulations for the Government of the various classes of the Reserves, or, if not so laid down, as may be determined by us:-

3.  All other persons present and assisting shall share as supernumeraries.

4.  Any Officer entitled to share in an award who shall have more Commissions than one shall be entitled to participate only according to the share allotted to him by the above mentioned distribution in respect of his superior Commission.

5.  Officers serving as Chief of Staff or Captain of the Fleet shall share as in Command of a Squadron or Ship.

7.  In the event of any difficulty arising with respect to any of these Rules, or if any case should occur not herein provided for, or not sufficiently provided for, or if the assistance rendered by any person shall be considered to merit a larger or smaller share than he would be entitled to receive under the foregoing Rules, we shall be competent to issue such directions thereon as may appear just and expedient.

8.  The scale of distribution herein contained shall apply to all Awards for Salvage distributed after the date of this order."

[Note. Changes in nomenclature of ranks and ratings since the above Order in Council was issued do not affect the allocation of shares in the scale laid down].

Now, to make it more exciting, I have consulted the 2003/2004 SHIPPING FINANCE ANNUAL, which deals with the cost and insurance of ships per se. It is a large document and from it I have selected four tables as shown below.

I have chosen 4 different types of vessels and each to show their second hand values. In two cases the tables show their cost/age price. The types are CHEMICAL CARRIER, LIQUID PROPANE GAS CARRIER, BULK [DRY] CARRIER and the proverbial CRUDE OIL CARRIER. 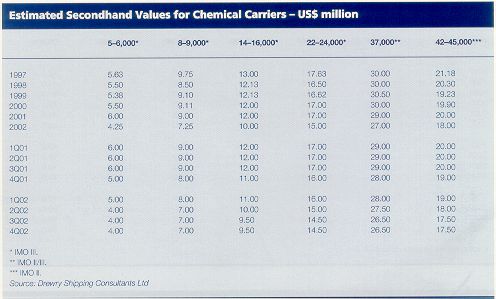 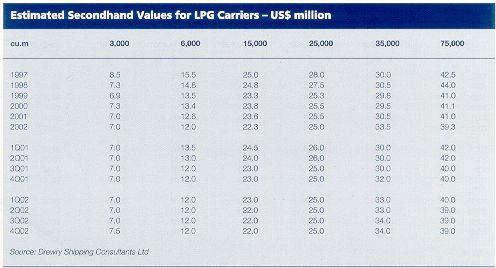 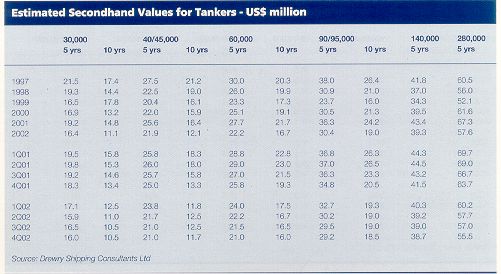 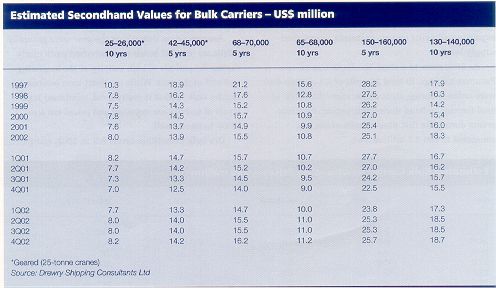 I leave it up to you to work out just what a small frigate acting as a salvor to a huge VLCC [very large crude carrier] might get.  Remember that price above is for an empty ship. The cargo alone could double the quoted figures in these tables. The rules for salvage are shown in the Merchant Shipping Act 1993 and I have given you here, a link to just one of many web sites showing that Act  - http://www.irishstatutebook.ie/1993_34.html . Nice to dream about.  Keep you eyes open for trouble!!