OK! We all know about physically camouflaging our ships to change their hull and sometimes superstructure profiles, even to the point of making them look much smaller, and in the extreme, confusing the distant eye into believing that there are two or more smaller ships in the same location occupied by the one camouflaged vessel.

Other methods of electronic deception [and thus camouflaging] were used both in hot and cold war states, and one of the favourite Russian tricks was to sail a vessel [often with others in company] from west to east, say Baltic to Pacific using radio callsign 'A' for example, then sailing a different ship[s] from east to west but not necessarily to the Baltic but possibly to the Northern ports of Murmansk or Archangel using the same callsign 'A'. The Russians swapped the transmitter and the operator from one lead-ship to another so that any photo-analysis of the transmitters/operators characteristics would not pinpoint a different ship.

With physical and electronic deception, came environmental deception, with a simple example being a smoke screen.  It temporarily hid the ship allowing it to escape to a new position which would deny gun setters the ability to set target course and speed before an engagement.

Subterfuge was used in WW1 as a camouflage whereby what the observer sees is entirely different to what he believes it to be.  Hiding from the enemy warship-assets and keeping them guessing as to dispositions of ships, was seen to be a worthwhile thing to do despite the materials used in the subterfuge.

Have a look at this war ship

and then at this one 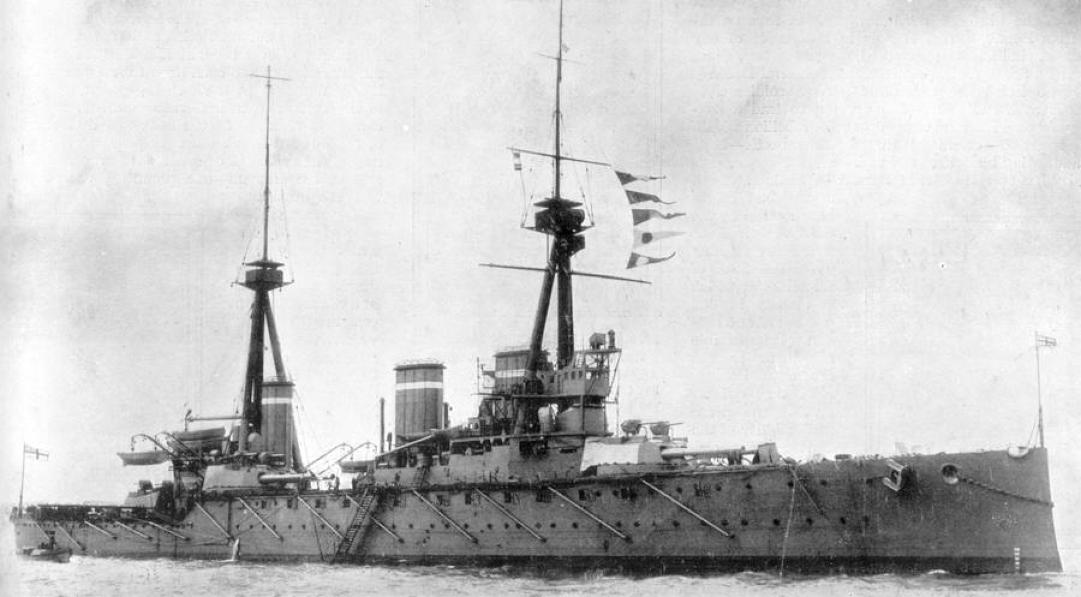 The ships are differently presented with the top one having her bows to the left and the bottom one to the right, the top one being more distant from our viewing position so not as clear as the bottom one. However, both are the same ship, the Battlecruiser HMS Invincible launched in 1907 with her two sister HMS Indomitable and HMS Inflexible. Both show a pre-modified class of ship with three uniform height of funnels. The design was flawed because the smoke, soot and fumes from the forward funnel severely affected the bridge areas of the ship and they had to be vacated when the wind was in the wrong direction. They fitted an extra fifteen feet to the top of the forward funnel in very early 1916. The top picture I can tell you is of Invincible off Gallipoli in 1915; the second is of the 1910 vintage. The bottom picture is correct and is of the ship HMS Invincible which suffered a terrible end at the Battle of Jutland 1916, six years later, when it blew up and sank taking 1000 men to their graves leaving behind only five survivors.  The top picture is of a merchant ship re-engineered cosmetically to look more or less the same as Invincible herself, designed that way to confuse the enemy, in this case Turkey. The false ship could be anyone of three Battlecruisers, so it was available for use after the loss of the Invincible.  Other classes of ship were copied in the same manner and for the same reason.

Whilst not considered camouflage, ships serving in warm or tropical climates painted their ships in much lighter shades of colours. Light blue, uniformly applied, was common but there were variations some official and some not so. Here is HMS Manchester in the late 1930's with a snappy two-tone trim of white [for the most part] with buff coloured funnels. Note the rig of the men on the fo'c's'le with blue top and white duck trousers. Note her S.16 antenna on the top of the foremast used for High Frequency Direction Finding, in those days using a Type FH set [no suffix]!