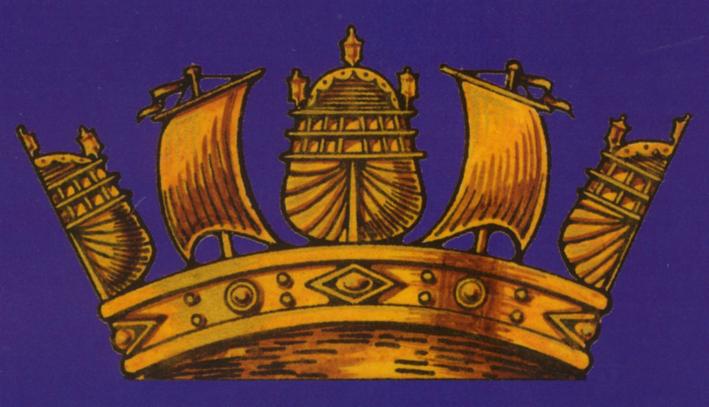 Above all else and notwithstanding modern trends [the R.N., Icon; various 'T Shirt logo's; Fly Navy flyers, and copious amounts of naval association badges and gimmicks] the royal naval crown is chief amongst all royal naval icons, and yet, whilst those mentioned above are obvious in their simplicity, the naval crown is really not well understood by so-called, naval people.

Manifest in that misunderstanding is the habitual use of colours, not only for the jewels on the base of the crown, but also to adorn the ship's or parts of ship's on the upper part of the crown. The crown was, and is intended to be, of one colour only [with artistic licence for shading] namely the colour gold. The background colour for the crown is academic and should suit the reason for its use, but it should, where possible, be bland and once more, a single colour.

The crown represents a specific time period in our history, but academics have an open mind to this theory pre-supposing that the 'emblem' is much older than we think !  The theory became a legend, and it is this legend which is predominant above every ship's badge/crest from circa 1919 onwards when ship's crest's became officially accepted and recognised by the Admiralty.  See http://www.godfreydykes.info/1927 GANGES BADGE AND MOTTO.pdf  Before that time, which includes ships like HMS Ganges [the ship], the design of ship's badges [icons] were down to the captain's aspirations/imaginations and his private purse.

Our history books are full of the adventures of Tudor Mariners, and especially of those cow-tailing to the Throne, and who better a pair than our dear Queen Elizabeth and that super star Francis Drake. He, in history,  is the folk hero of the Spanish Armada, but the truth of the matter is that despite history telling us that the Queens grandfather [Henry VII] - the founder of the Navy - used [or is it abused by her father Henry VIII] was most unprepared for an invasion by a foreign despised Catholic nation.  When the bowling had finished on the Hoe [as we are told ?} Drake had few naval units to call upon to save the day, and were it not for the majority of the British opposing fleet [merchant men by and large], the day would have been lost saved only by the British weather and the audacity [leading to incompetence] of the Spanish naval high command.

The paragraph above leads to a specific accusation, namely that our STANDING NAVY was a SMALL and DIMINUTIVE outfit, not fit for the purposes of protecting our shores, whereas the Spaniards were a professional outfit, omnipotent in the same way as we, the Royal Navy, were at the start of WW1 in 1914, with large and powerful warships manned with full time professional sailors and soldiers.

That is what the royal naval crown is all about - telling the story of the LEGEND.

The two sails [images 2 and 4 from the left] - the single sails, are those of the British and her allies, sailing amongst the huge Spanish warships, room only [on the crown] for a centre ship and two halves left and right extremities respectively.

That this 'tiny and diminutive' navy, assisted by the UK weather, suggests the legend of David and Goliath, where Goliath [the Spaniards] were slain by a much lesser force.

The Royal Navy of course went on to become the biggest and best navy in the world and held that position for more than 300 years, so one might argue that the crown had a reversal somewhere in the legend dating from 1588. It is edging that way today in 21st century with ever growing and increasing cuts in defence spending.  Today, almost, we could also argue that the legend has come a full circle, and that we are again that tiny and diminutive navy sailing amongst our allies and would-be adversaries in time to come [China for example], but despite being 'small' we still pack a punch in the defence of the mother land, and long may that be.