Ask a person today what they know about the navy's input into atomic bomb testing, and they will almost certainly mention nuclear radiation from which men today suffer, nay die from. That is very sad for many of those men were used as guinea pigs, and whilst just about everybody had seen pictures of the total devastation in Japan, few really knew the consequences of fall out. They will also mentioned Christmas Island where the main British Tests were conducted. Christmas Island, which is 800 miles almost due south of Singapore, is 950 miles NW of Monte Bello, and Monte Bello is just 50 miles off the Australian mainland, where the navy tested its device.

The weary days of WW2 and the privations our nation suffered, were temporarily brushed aside when London staged the 1951 Festival of Britain on the South Bank.  One of the main features and attraction in London was a large warship called HMS Campania. As well as being large, she was the Festival Flagship and quite recently she was shown on television in a Pathe Newsreel Film about the Festival.

This is her and she was an aircraft transporter not an operational carrier. 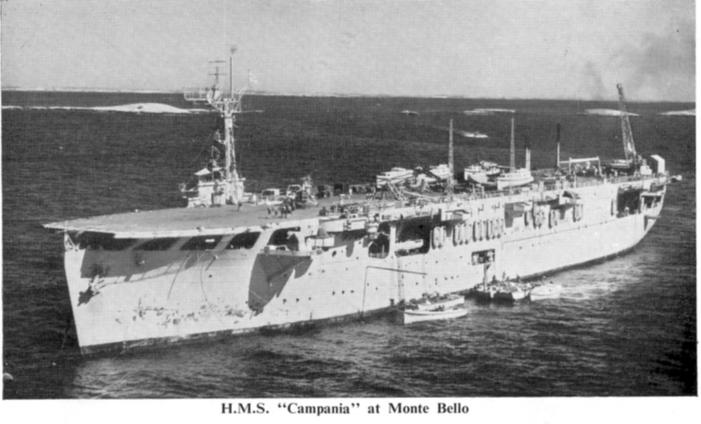 Just a few months later she was off Western Australia near to the Monte Bello Islands as the Flagship of the British naval atomic bomb testing Task Force. This was very much a naval test because one of the great fears about the Cold War was that a foreign merchant ship could enter one of our ports with a nuclear bomb inside the ship, and there detonate it destroying the port and the city/area it served in one foul swoop. The test bomb would not be dropped from an aircraft, nor would it be detonated from a gantry high above the sea surface, but in one of HM Warships, thereby simulating the foreign ship threat and devastation.

It is always sad to see one of our ship's destroyed by our own navy experimenting with new weapons and procedures, and usually we see the poor old ship suffering, breaking up and slowly slipping away out of sight. On this occasion however, the ship was there one minute and quite literally pulverised the next and just a cloud of white dust left. That was the fate of this ship HMS Plym 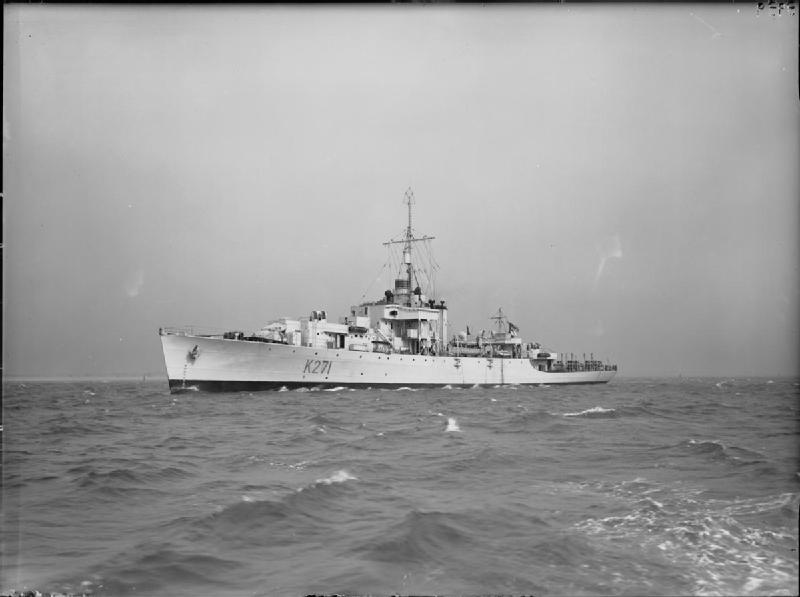 and here, just to dot the i's and cross the t's, a broadside-on picture of a River Class frigate with statistics, namely that of HMS Meon in Grand Harbour Valetta Malta in her war colours dated 1943.

Please do not be confused by the pennant numbers because war/post war numbers changed and confused everybody. For example, my first ship was a Castle Class frigate, 'Tintagel Castle', and by the time I had joined her she had shifted from K399 to F399: the reverse procedure was not uncommon! In the 1953 film 'The Cruel Sea' the main ship used at Portland was HMS Porchester Castle, but Tintagel Castle gets a quick look in with K399 whilst alongside at Inner Coaling Pier [ICP].

Was the test successful? Probably, we don't know, but the men there in 1952 even of the tender age of 20 years, are now aged 79 and what problems might they have as a result of nuclear radiation?

In 1956, more tests were conducted at Monte Bello, but this time, on research and relatively 'small' bangs rather than on big bangs and the sinking of a ship as was the case in 1951. It involved a Task Force [TF 308] of eight RN ships led by Commodore Hugh Colenso Martell R.N., flying his Broad Pennant in the Tank Landing Ship 'Narvik'.  It travelled, with the Task Force, to and fro between the Monte Bello Islands and Christmas Island doing this research.

The research was deemed to be "Operationally Urgent" and was to be completed with proven data before 'Operation Grapple', involving a series of tests on the use of atomic bombs as triggers for their thermo-nuclear descendants which would be carried out at Christmas Island the following year in 1957. Research was also needed into wind patterns and upper atmospheric behaviour, making sure that the Australian mainland was not illuminated with fallout or any other damage. There were three bombs all dropped by Valiant Bombers, the first being, "Hotshot", dropped on the 16th May and detonated at 18,000 feet with 15 kilotons, more powerful than the Hiroshima or Nagasaki explosions, and on June 19th, the last bomb, "Flashlight", vastly more powerful at 98 kilotons. All seemed to have gone well; the scientists were satisfied, and Martell was appointed CBE. However, many years later in 1985, the Australians set up a Royal Commission in London on the Monte Bello Tests, which alleged that because of a change of wind the British [and therefore directly Admiral Martell] had allowed the Australian mainland to become contaminated. The Admiral stood his ground with irrefutable evidence and sent the Australians packing. This officer was quite a character in other ways and was so well known for many reasons, one being that he had fourteen children. More of this in this story HMS_BELFAST_WITH_A_VERY_DIFFERENT_CREW