THE LAST CLIP ON THE LAST CARD

The picture below shows the last issue of rum [31st July 1970] to the ship's company of HMS Ganges.  The venue is the quarterdeck and you can see both its mast and the main mast. Note the black arm-band worn by the leading hand on the right, and that both the fanny and the rum tub are bedecked with symbols of mourning. Under those mourning bands reads, on the top line "The Queen" and on the bottom line "God Bless Her".  Every run tub throughout the navy had those word, formed by large solid brass letters individually cast, screwed onto the barrel with brass screws. But why? When did that change, for it was not always like that? For most of Queen Victoria's reign, all of King Edward VII's reign, all of King George V's reign, and a goodly part of King George VI's reign, the wording was very different as my picture at the bottom shows. 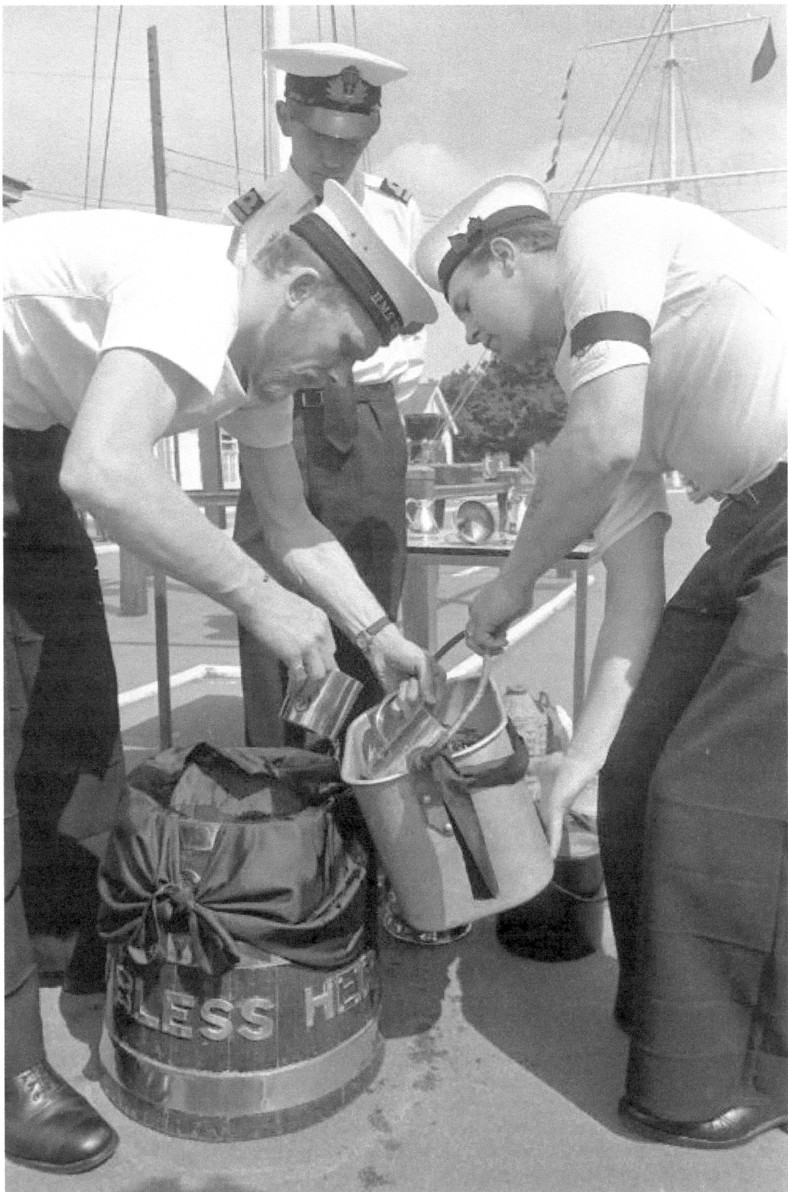 This picture comes from HMS Glory taken in 1901 at the very start of King Edward VII reign. She was a mighty battleship, brand new, and is shown here in Hong Kong harbour as part of the China Fleet. Note the wording on her equally brand new rum tub. I have searched high and low but cannot find out why the wording change although I know roughly when.

Another 'black day' [at least for some] was on the 27th January 1989, nearly twenty years later.  Rum had been found to be detrimental to the good functioning of the sailors efficiency, and now cigarettes were considered bad for his health. 'Blue Liners' were withdrawn. All other duty free cigarettes and tobacco [known more generally as H,M, Ship's cigarettes] were gradually increased in price over a two year period, until by January 1991 they were the same cost as civilian cigarettes/tobacco. For those of you not familiar with the two expressions of 'Blue Liners' and 'HM Ships tobacco' together always referred to as DF's [duty frees] here is a very brief overlay. The packaging of the products looks like this

Blue Liners, cigarettes with a thick blue line throughout the length of each cigarette, were issued to sailors serving on terra firma. For those serving afloat, the packaging was endorsed with "H.M. Ships Only" and this endorsement was added to each and every cigarette along its length. It was said that there was a huge difference in quality with the HM Ships variety being to full commercial standards, and the RN type being the sweepings from the factory floor when the former process had been completed. Whatever, many in the navy smoked so they were a much treasured perk.

Of some considerable interest during and after WW2 was tobacco; who got it free of cash or free of duty, and in what amounts.  Virtually every adult in the civilised world smoked and so did a considerable amount of youngsters, even children. Cigarettes, like the staples [food, water, fuel, clothing, housing etc] when in short supply or worse still, when not available, caused major problems for the authorities, even taking up time in both Houses of Parliament. In the Forces, mutiny was never far away when rations were in short supply. To demonstrate just how powerful tobacco was to the nation as a whole and to members of the armed forces in particular have a look at these short files which come from Parliament. They deal with the army and the navy but the air force and the marines, when not embarked in H.M. Ships, were treated as for soldiers.

asked the Secretary of State for War whether he is aware of the dissatisfaction of members of the Services because of the recent cut in the amount of cigarettes; and if he will arrange for the usual supply to be made available.

asked the Secretary of State for War if he is aware of the shortage of cigarettes amongst the Army of Occupation in Germany and Austria; and what steps he is taking to remedy the situation.

So far as I am aware there is no shortage of supplies of cigarettes for the normal free issue of 50 a week per man. It has been necessary, however, to reduce the quantities on sale in N.A.A.F.I. canteens abroad, because of production difficulties, the cessation of lend lease supplies, and the serious shortage of cigarettes for civilians in Great Britain. Cigarettes are now released for sale in canteens at the rate of 280 a man per month, as against 360 before 1st August. The troops were informed of the reason for the reduction and as far as I know, there have been no general complaints. It is hoped that the situation will be easier by the end of the year.

Can the right hon. Gentleman assure the House that the men in Germany and Austria have the same facilities for getting cigarettes as if they were stationed at home?

I should be surprised to know that they have not, but I shall have to look at the question before I can give a definite answer.

asked the Secretary of State for War if, in view of the stop on duty-free cigarettes for troops overseas, he will consider either an increase in the weekly free issue or taking steps to supplement the quantity which can be acquired weekly from the N.A.A.F.I.

It is intended to increase the weekly quantity of cigarettes obtainable through N.A.A.F.I. to 75 per man at the earliest possible date, as compared with the present 65. With the free issue of 50 there will then be a total of 125 weekly available for each man. This is much more than the number provided for the smoking population of this country, and I see no grounds for a further increase until adequate supplies are available generally.

asked the First Lord of the Admiralty what steps are being taken to remedy the serious shortage of cigarettes for Marines serving in the Far East.

Supplies of cigarettes are allocated for sale in canteens to personnel serving in His Majesty's Ships and naval establishments abroad on the basis of 400 a head a month. In addition, the men can purchase, from Service stocks, pipe or cigarette tobacco up to 2 lb. (equivalent to 800 cigarettes) a month. There is no differentiation in this respect between naval ratings and Royal Marines. The world-wide shortage of cigarettes makes it impracticable to get an increased allocation for sale in naval canteens in the Far East.

asked the Secretary of State for War if he is aware that five German women employed in his office by a  town major in Germany, are allotted a weekly allowance of 50 cigarettes; and, since British troops are unable to obtain sufficient cigarettes for their own needs, will he issue instructions that this practice shall cease.

No authority exists for any issue of cigarettes to German civilians employed by the military forces. The women referred to by my hon. and gallant Friend may have received cigarettes as a personal gift, but orders have now been issued that any such practice should cease.

This picture below comes from the 1890's and shows a Petty Officer First Class [all wore square rig] being issued with long strips of tobacco and soap bars for dhobying. The two officers are non executive officers from the "Civilian Branches' [no curl on their top stripe] Supply Branch; the man writing the ledger is a CPO Writer [CPO's didn't wear three buttons on their cuffs at that time and the man standing to his right is a junior rate also in the Writer Branch and he also wears fore and aft rig.  The sailor behind is helping to dish-out the goodies.