You know, years before the hideous beret was introduced; the woolly pulley: the zip-up sailors jacket and the single north-south crease in the trousers, and yes [I seek no allies here !] the donning of this much altered uniform onto the female frame, royal sailors had a special pride in their appearance which for a rating dressed as a seaman [many were not] was called "tidily" and for others, but mainly senior rates and officers [warrant and commissioned] was called "suave". That has all now gone and apart from the women bit [I feel so sorry for these girls but also for the navy] there is a good reason for this change which has been with us for many a long year now. In my day, we went ashore in our uniforms !  In effect, we had two uniforms, that worn onboard and for ceremonial reasons and the uniform  for going ashore. The ceremonial uniform {No 1's} and the going ashore uniform were one and the same, with the latter witnessing a few modifications and enhancements.  When onboard it 'impressed' the inspecting officer and when ashore, it 'impressed' the girls.  I would argue that the going ashore rig was just that bit better than the weekly division rig and sailors took genuine pride in their appearance and I would summaries this by saying 'best suits' onboard were compulsory whilst 'best suits' ashore were a necessity !  Ratings are dressed in three Classes.  Class I and III are fore and aft rigs [peaked caps] Class 1 being PO's and CPO's and Class III being junior rates of the S&S Branch, SBA's, CODERS 'S' & 'E'.  Class II rig is square rig, worn by men dressed as sailors in bell bottom trousers and by acting PO's of those branches during their one year probation before confirmation when they cleaned into Class I rig. On working caps, sailors wore rayon cap tally's and on best caps, gold wire cap tally's. The badge on Class III caps was red and black whilst on officers caps and Class I ratings caps, multi coloured fabric was used under sewn with gold wire. Chin stays on Class II caps were regularly worn but rarely on Classes I and III or on officers caps. Neb's <n> {sic O.E.D.} on all peaked caps up to and including the rank of lieutenant commander were unadorned and shiny. Caps for commanders and above were covered in cloth and adorned with either one row of gold embroidery [egg-shell/brass hat] or two.

Caps in the navy up to and including the mid 1950's, were more than just an official symbol, where, when worn, duty called, and when not, a stand-down from duty was the order of the day. For example, an officer patrolling the touch-line of a shore football pitch to support his ship's team would carry his cap to signify that he was in a state of being off duty and therefore did not expect a salute:  on a more sombre note, a rating told to "get his cap" was in for the high-jump and when wearing it, very much on duty. Sticking with "on caps" and the reverse, "off caps" and therefore with caps as opposed to hats, caps were worn all the time for duty purposes and they were expensive items to replace when lost or BER [beyond economical repair], and therefore we looked after them with more zeal than one might a wretched beret. Everything about the naval uniform was attractive, though often difficult to robe and disrobe, and shoes, cleanliness, whiteness of white things, ironing of deep creases etc was important, but of all uniform items, the cap was the most important piece of kit. Many of my readers will well remember the cap-box, issued to them as a piece of kit [a cumbersome piece of kit] which they carried with them wherever they travelled, and the custom observed in most parts of the world  {Singapore and Ceylon being the exceptions with white caps worn all the year round] of wearing black caps in the winter months and white caps in the summer months: the change over date to white caps only was the 1st May 1956.  During WW2 there were no set rules on when black and white caps should be worn.  However, I wonder if these same people remember the 'working cap' and the 'best cap' in each period [summer-winter] requiring four caps during the year. The cap, its use and its stowage was a problem, and usually the best cap got a place in one's locker whilst the working cap rested where convenient, often on the tops of lockers, fan trunking's, and many other places.  Before I start my story proper, have a look at this snippet taken from a loose minute sheet and written by very senior naval officers. Note the use of the expression "is an embarrassment." 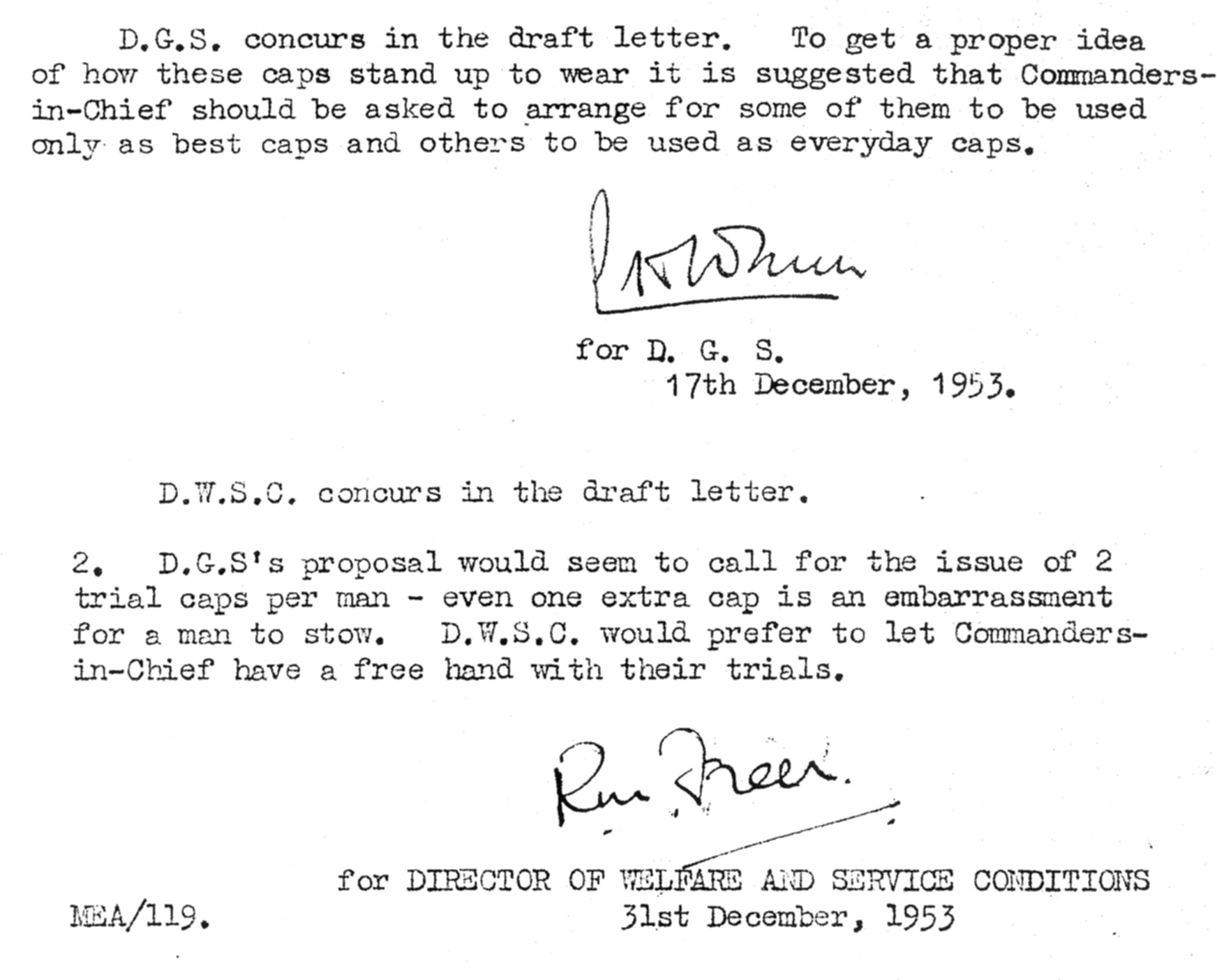 Black or white, the sailors cap was a comfortable but rigid headgear, stiffened without the need for a grommet, whereas the peaked cap was stiffened with a wire grommet which could be removed. Once removed, the cap often took on the look of a floppy bag and was most unService-like. The winter cap was the easiest to manage because it required only a brushing.  The summer cap for peaked caps was simply the winter black cap with a white cover stretched over it whereas the summer cap for a sailor was white and involved a whitening process [Blanco, a trade name, came either in khaki or white] which was a messy job and didn't like the rain. However, the result was a brilliant white cap set to a perfect bent-angle.  I remember well wearing a white plastic peaked cap [1962 onwards] with a bleached and starched linen cover, and this with my starched detachable collar with front and back stud and finely knitted tie made me feel like a million dollars. Even in my tiny personal space in a submarine, I always carried a 'roll' of newly laundered stiff detachable cut-away collars and when in harbour dressed neat and natty with highly polished steaming boots !  Before moving on, I am going to call the 'winter' cap a black cap, but in some of the text to follow you will see it referred to as a blue cap.

Now for my story.

The war affected the navy in many and diverse ways and one of these was the change to naval uniforms.  In 1952, rationing [clothing and food] was still in existence and the officers resplendent dress of pre war days could no long be maintained or afforded by the navy in first issues or by the individual for subsequent maintenance and replacement. Many items of uniform were deleted and economies sought right across the board. One item of dress which was targeted was the officers naval cap.

As you will see, the trial went on for nearly two years and was largely inconclusive.  Many senior officers got involved, some rather passionately and between them returned reports of favourable, not favourable, and ambivalence. In 1954, the Admiralty decided that they would also include a survey for ratings white hats and duly issued new questionnaires and trial schedules putting the officers results on the 'back-burner' awaiting the results of the ratings survey which would last yet another year, taking the trial from 1952 to 1955 enough time to build a warship ! In a moment we will see that letter adding ratings to the trial.

One of the most high profile returns was from C-in-C Mediterranean, Lord Mountbatten of Burma.  He reported twice and very forcibly in favour, once in January and again in May of 1953. His submissions are on pages 1-3 in the following PDF file.  Page 4 of the PDF shows what the Captain of HMS Terror thought which is not exactly favourable or complimentary stating at paragraph 6 that it may be fine as a working cap but certainly not up to being a ceremonial cap. The Captain of C-in-C Home Fleet's  flagship HMS Vanguard report [pages 5 and 6 of the PDF] is encouraging in the main, but concludes [para 13] that it should be an optional alternative to the old black cap with a white cap cover and not a replacement: his comment in para 9 is quite alarming....pouring lighter fuel/fluid onto a plastic surface is, I suggest, not to be recommended ! Page 7 of the PDF is C-in-C Home Fleet report [with Vanguards letter as an enclosure] and he endorses what his Flag Captain has said. Flag Officer Malayan Area [page 8 of PDF] says in his Para 1[a] that the new cap looks cheap and garish in comparison with the black cap and white cover.  His para 3 is damning and whatever he says after that is rather pointless. To him, the new cap is a no no. HMS Newfoundland's report at pages 9 and 10 of the PDF [one on the cap and one on the plastic cap cover for the old black cap] are on the whole encouraging and pro both. The 'boys' in the Far East are unequivocal about their thoughts on the new white plastic cap - see page 11 of the PDF.

There follows three snippets from Loose Minutes in this file. One mentions the procurement of the trial hats; one that the wearing of white caps in the UK winter months for trial purposes should be endorsed, and on this same loose minutes is the cost of the project namely £350.  The handwritten part says that ".....the £350 to be spent now will be more than repaid from savings in the issue of headgear in future years." The third snippet confirms that the C's-in-C should have a free hand in running the trial.

As already stated above, after a while, the Admiralty decided that all caps in the navy should be reviewed and become the subject of a trial/survey.  It issued new orders and a sample of them are shown in the following PDF file. In the Message on page 6 of the PDF, I do not have C-in-C Plymouth's 131155 so I am not able to say what the original list of ships was. As far as I am able to ascertain the results of page 8 of the PDF { FO2 FES, embarked in Newcastle} Birmingham's results arrived too late and were not considered: the resultant AFO was published in April 1955.

Not to be surprised  [it is common place on ratings matters in Admiralty archives] there was little of the feed-back [if there was any] on the merits or demerits of the new white plastic sailors cap recorded or kept !  There was certainly no adverse comments which would have caused concern in the Admiralty and the cap was successfully adopted.  Indeed, I joined the navy in October 1953 and was issued with two black caps and a cap box. I left Ganges for my first ship [Tintagel Castle] still wearing my best black cap but by the time I joined my second ship [Eagle in mid 1955] the AFO introducing the new cap had been issued and I wore white plastic year round from that time on. I remember it being a good product and not having to whitening it with Blanco was a step in the right direction. I cannot remember a bad thing about it.  It was popular because it was round like the hat it replaced [and bent easily into attractive shapes] and I mention this because not long after an oval style cap was introduced, said to be of Royal Australian Navy [RAN] design and it was positively hated by all.  If SLOPS didn't have round caps, then a visit to a naval tailor soon sorted that problem.

Soon, I will be telling you about the sailors uniform and guess what, the choice between the front zip or the side zip on the sailors jacket; the jacket type sleeves, the conventional zip front trousers but not of circa 1970's but in 1949.  The sailors hated the idea so much that the ideas were squashed and the tidily sailor kept his gear and more importantly, his image. Goodbye.