On 5th April 1958, the Royal navy issued its first Submarine Branch Badge, a cloth badge, which was to be worn on the left sleeve above the wrist. Due to its ugly design it was soon known as “a sausage on a stick”. As the wearing of the badge was optional, many submariners chose not to do so.  I still have my 'sausage on a stick' badge - drew it from SLOPS with great pride but never got around to sewing it on. It came in the traditional colours of gold, red and blue. 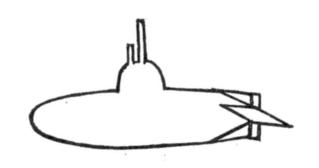 At sometime in 1964/65 an RAN Submarine project team forwarded a properly designed submarine badge to the Australian Naval Board, via Rear Admiral VAT Smith, RAN, who convinced the Naval Board that the proposal should proceed subject to a suitable design being developed.

Subsequently the Naval Board accepted the design and on the 25th July, 1966 issued Navy Order No. 411, covering the issue of the badge

In 1968 the crew of HMS/M Trump, the last submarine in the 4th Submarine Flotilla based in Sydney, were given Australian submarine dolphins to wear for the year. At the end of the year the sailors were asked to fill out a survey. Ninety nine per cent of them were in favour of wearing the badge, and the design.

It was not until 1971 that the Royal Navy issued its own submarine dolphins, based on a variation of the Australian design which is shown below. Fortunately, we copied the Australians, for had we followed the Americans, which we do more often than not, we would have had two badges, gold for officers and silver for ratings.

This picture shows FOSM's Division in HMS Dolphin in 1971, when the submarine dolphins metal brooch was handed out to all submariners serving in Blockhouse and in her Squadron Boats.  The ceremony was repeated in all UK submarine bases.