THE DISTURBANCE AT PORTSMOUTH NAVAL BARRACKS IN 1905

To most of us, a disturbance suggests a break in a quiet or peaceful period, so, as you are about to see, using the word in this case is, I feel, misleading in the extreme.  In the Fleet and in the community [in particular the working class  citizens of Portsmouth] this was an event which was seen as the seaman executive gunnery branch belittling an engine room branch [stokers] who were non executive - it became a period of infamy in the history of the Royal Navy. Remember that at this time [1905] seamen sailors were known as 'bluejackets' and stokers were known as 'stokers'.  Executive officers and ratings vis-à-vis non executive officers and ratings were NOT AMALGAMATED, which effectively meant two quite separate groups of seafarers in one navy both for professional and disciplinary matters.

Have a look at this picture which I have already published under "Ganges Old and Rare Photographs" on this site where I have explained what a Morris Tube is etc, and that you are looking at HMTE Shotley, which came before RNTE Shotley and two before HMS Ganges. All I want you to do is look at the words "Firing Kneeling".

Although it was never written in a drill book until after the second court martial in December 1906, it was an order given by Gunnery Staff for men to go down on one knee or perhaps both knees to fire a small arms weapon. The order was simply "on your knee" and that was all there was to it. Unless one had a need, by virtue of training, to handle small arms, one would not know about this semi official order unless by hearing it on the messdeck.

On the 4th February 1905, a well meaning gunnery officer, used the order to a group of stokers who were being rowdy and ordered them "on your knee".  The next day, the 5th, these same stokers caused a severe disturbance in the barracks which spilled out into Queens Street in full view of the general public. Note that the barracks had just been opened at this time. What happened thereafter shook the Royal Navy to its core and resulted in one the stokers being jailed for five years; whilst others were given hard labour sentences and others, and the hapless gunnery officer was court martialled and given a reprimand. Soon after the courts martial were over and the sentences given, the three senior officers in RNB Portsmouth were sacked and replaced which included the Commodore [COMBRAX], the Commander [XO] and Commander [G] who was accused of allowing an order used only for gunnery drill to be used as a 'general fleet discipline order' to the men.

It is a sad story, even taking into account that Stoker MOODY [and others] were hell bent on causing trouble, and one which should never have been allowed to develop. Remembering that the disturbances took place on the 4th and 5th of November 1905 and the courts martial were not convened until the following year in November 1906 [for the stokers] and December 1906 [for the gunnery officer] the chief rating offenders would have spent all that period on remand in DQ's or Navy Jail [see NAVAL PRISONS AND NAVAL DETENTION QUARTERS] a hell of a punishment in itself especially in those days of harsh treatments. Here then is that story beginning with a letter to the Editor of the Times newspaper and following on by date order.  We start therefore with the 12th November 1906 and in this letter there is a reference to HMS Nelson. It is ironic that the barracks became known by that name many years later. This is a picture of HMS Nelson, a battleship built in 1876 and sold in 1910 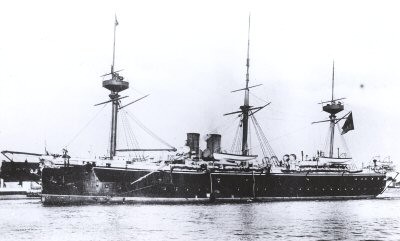 IMPORTANT NOTE. It was the gunnery officers order which caused all the problems and led to the disturbances. Therefore, it is logical that despite the order of the courts martial by date, you should start reading Lieutenant Collard's pdf file first, then the Letter to the Editor, then Moody Brown and Leigh and finally the Admiralty Final Note.