On the 18th March 2012, at the Dedication of the Boys Memorial in Portsmouth's Anglican Cathedral, please say a prayer for the Soul of, and many others who share near-exact tragic and heart-breaking stories like this one.

In this picture, William, known as Bill, is a Boy 1st Class seaman and aged 17.

He was born in Edinburgh in July 1923 and at the time of his death, in May 1941, he was 17 years and tenth months old, but, as was often the custom in those times, he was still rated as a Boy 1st Class.

He joined HMS Ganges as a 2nd Class Boy in October 1938 aged 15 years and three months and first went to sea at the beginning of WW2 in 1939 in the battlecruiser HMS Hood. He kept a diary of his Service in 1940 and at the beginning of 1941 probably started one for that year also but that would have perished with him. This is a page from the 1940 diary, covering the dates 17th June until 23rd June. 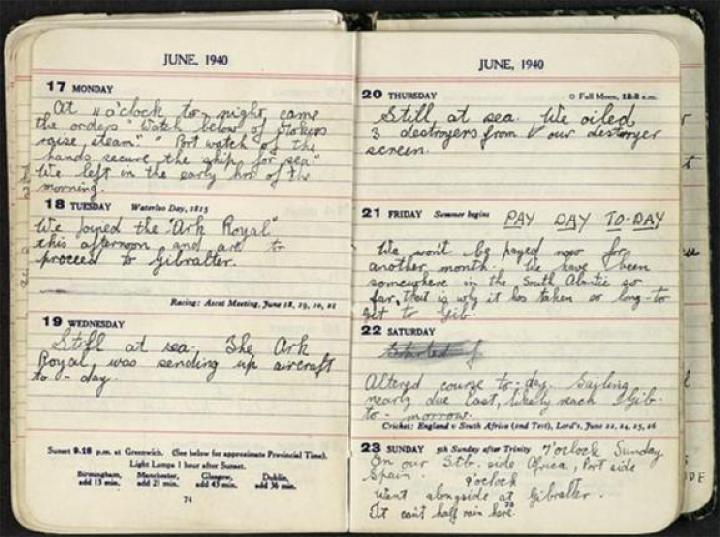 Translating the diary of a naval boy into official naval history, we would have seen that the page before these would show Hood on the 14-16 June, in the Bay of Biscay meeting a Convoy {US3} bringing ANZAC troops to Europe. Hood, with the cruisers Argus, Dorsetshire, Shropshire, Cumberland and nine destroyers led the convoy home safely to the UK and then went to Greenock for a paint-ship and to give leave. You will see from the diary page that she started to prepare for sea at 2300 on the 17th slipping and proceeding in the early hours of the 18th. She was heading for Gibraltar escorted by the destroyers Fraser, Restigouche, Wanderer, Skeena and St Laurent joining the Ark Royal west of Malin Head [most northerly point of Northern Ireland] and travelling south in the Atlantic west of Ireland. She arrived Gibraltar on the 23rd at 0900 and stayed there until the 26th June. On the diary page for the 20th, note the RAS of FFO for three destroyers. Note also the Pay Day entry and that to his mind they had been in the South Atlantic for it was unusual to take five days to reach Gibraltar from the UK. A few more diary pages down the line, in July 1940,  would have revealed Hood in action with her 15" guns shelling Oran, a Port on the Northern coast of Africa against elements of the French Fleet not willing to come over the Allies side to fight the Germans after France had fallen to the 'jack-boots'. For the rest of 1940, Hood had a very busy war, seeing several engagements with the enemy, working between the UK and the Mediterranean. Likewise, the first four months of 1941 were hectic and the Hood was here there and everywhere, often in lead roles seeking and harrying the enemy whether German or Italian. At the start of May 1941 she was either in Norwegian Fjords, en-route to Scapa Flow, or in Scapa Flow. However, on the 3rd May whilst the ship was at Havalfjord, Bill wrote what was to be his last letter home to his mother. It is not known whether the letter was actually mailed from Havalfjord [Hood sailed on the 4th] or from Scapa Flow, Orkneys, sometime after the arrival date of the 6th May. Note from the letter, a second and terrible irony bringing further grief to the Crawford family in 1941. The letter refers to Jim who was serving in the Neptune, a cruiser. This ship 'ploughed' into an unchartered minefield off Tripoli North Africa in December 1941, and every crew member except for one [764] was lost. There is no mention of a Crawford in the list of the lost, so we must assume that Jim was either a cousin, a neighbour, or a close family friend. In December 1941 also, the carrier Ark Royal was lost, but fortunately this time, out of a massive crew, only one man was lost. 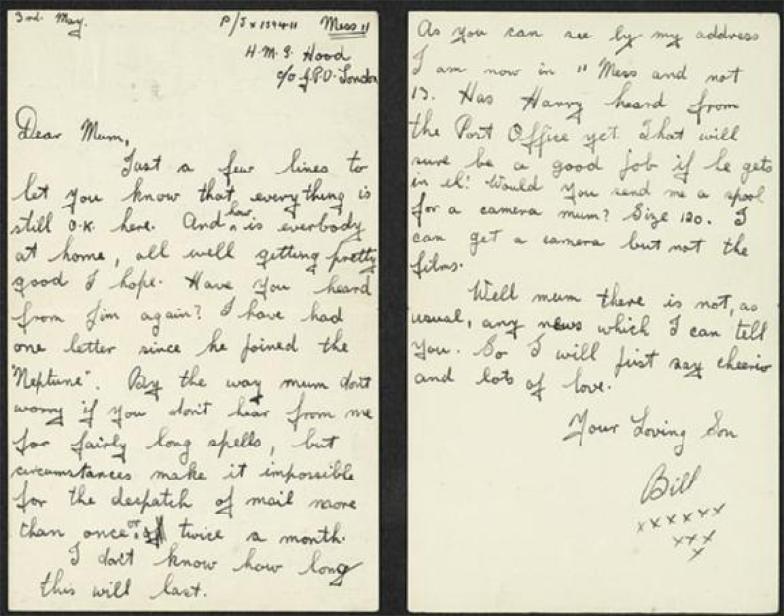 It was at Scapa that they said goodbye to the admiral, Whitworth, and said hello the the new admiral, Holland, who would perish with the ship in the same month. On the 14th May, rather poignantly, Hood carried out her last major damage control exercise within the safety of the Flow. By the 22nd May she was at sea in company with the battleship Prince of Wales and six destroyers looking for the German battleship Bismarck at sea on her maiden voyage, the only voyage she would have!

The story from here, is proverbial, and on the 24th May 1941, the Hood was sunk by the Bismarck leaving only three survivors out of a crew 1418 men. Bismarck herself was sunk just days later.

The photograph, the diary and the letters were all that Elspeth, his mother, had left of her precious son William, but at some stage, this poem was added to her pathetic bundle of keepsakes. 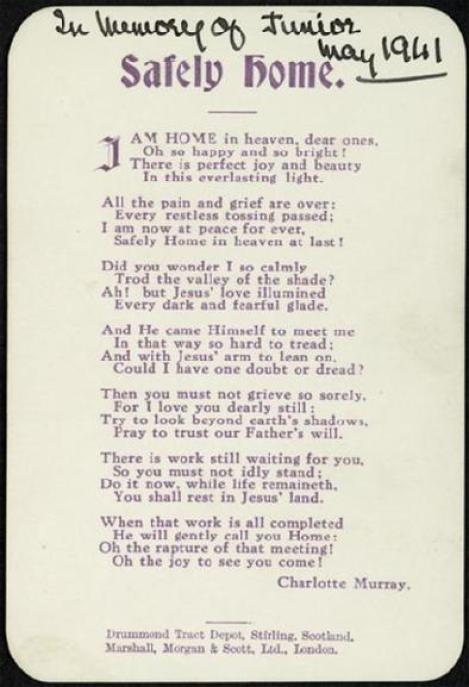 This is the epitaph of Boy 1st Class Crawford at the Commonwealth War Graves Commission.

Son of William M. Crawford, and of Elspeth F. Crawford, of Edinburgh.

On this special day [the 18th March 2012] of Remembrance for the Boys who died in WW2 {but for all Boys of all Wars} please remember Bill.