Button and badges, as worn on naval uniforms, bear a crown.  It is not a naval crown, for that of course is the traditional crown dating from the 16th century. This is a picture of that crown shown correctly, namely that all parts of the crown are gold and must be shown as such.

However it is a Royal Crown {first used in 1812}, and in times past, was worn on all naval uniforms, many tens of thousands more than are worn today.  That reduced number is not merely that the British navy has reduced its numbers dramatically, but that some navies are no longer 'royal' {*RIN, RPN, RSAN, RCN, REAN, RMN, RNN} and several branches in the Royal Navy, some no longer in being, no longer wear uniforms requiring 'shiny' buttons although they still require badges #.

1880 was the year in which chief petty officers joined warrant officers and commissioned officers  wearing a uniform which required buttons to fasten in addition to buttons of rank/rate and other adornments.  In the 18th century, buttons consisted of white metal, usually with a rose in the centre. In 1774 a foul anchor surrounded by rope edging took the place of the rose and in 1787 the same device with the addition of a wreath of laurel leaves was adopted for Admirals. When the Merchant Navy started to use the foul anchor device, a crown was added to naval buttons in 1812. The same basic design remains in use today.

The foul anchor device itself was first recorded in use in the seal of the Lord High Admiral of Scotland in 1402. It was subsequently adopted in the Admiralty seal and by a large number of navies throughout the world.

From the crowning of Queen Victoria onwards [Edward VII, George V, George VI, Elizabeth II] only two crowns are used by the sovereign. There is however a crown called the Imperial Crown of India but that was last worn by George V.

The shape of each crown is very different, so is the height and the weight.  The St Edwards Crown was too heavy for the petite Queen Victoria so she used the then Imperial State Crown which was appreciably taller than the one above right but weighed much less than the crown above left. Apart from St Edwards Crown which dates from the restoration of the Monarchy [Charles II] in 1660, the designed and comfort factor of the Imperial State Crown has been replaced and altered several times since 1837 when Victoria was crowned. The one you see above was made for George VI in 1937 which was altered to make it "more feminine" for Elizabeth II in 1953. This is the crown we see our Queen wearing at the State Opening of Parliament each year. It is conceivable that a new Imperial State Crown will be made for Charles III or that the existing crown will be modified to become more masculine.  However, for the purposes of my story, I want you to take particular note of the shape of the front-back, left-right connecting arms supporting the apex of the crowns, namely the orb and the cross.

The shape of the St Edwards Crown has become associated with a QUEEN'S CROWN whilst the [not set in stone Crown {pardon the pun}] the Imperial State Crown, with a KING'S CROWN.  The truth of the matter is that the two crowns used for buttons and badges are called the 'St Edward style crown' {see above left} and the 'Tudor style crown'  {see picture below} 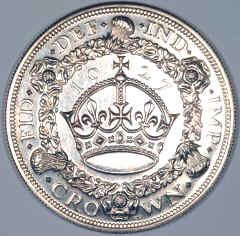 and it is the personal choice of the monarch as to which he or she uses. From this we see that the Imperial State Crown has no bearing on the crown used on uniforms.

Today, both crowns [St Edwards & Imperial State] are worn {as stated} by all monarchs irrespective of gender. There is only one aspect on the subject of 'crowns' which is gender based and that is the wearing of the Koh-i-Nur diamond presented to Victoria in 1850 from the Treasury at Lahore in the Punjab. This famous diamond is not part of the crowns shown above and it can only be worn by a woman {a Queen or a Queen Consort} bringing eternal bad luck to a man if he were to wear it in whatever form. It is currently built into the crown which was made for HM Queen Elizabeth The Queen Mother for the Coronation of her husband George VI.

The job on hand was enormous both to the navy for its design, procurement, distribution and issue, but also to each and every man and woman in uniform. It involved all the armed forces of the UK plus all the armed forces of Commonwealth countries which were still prefixed by 'royal'.  If we took just the navy alone, the amount of cotton used in the sewing on of new badges and buttons for the lower deck {dressed in fore and aft rig and square rig} and for commissioned officers, would have meant a run on cotton mills and bobbin mills.

If then the navy should choose to revert back to the Royal Crown of the Tudor's when our Queen dies [she will never abdicate nor should she], the so called King's Crown, will they have enough money to pay for such a change, albeit with much smaller numbers involved than was the case in 1952, or will they be so badly cash-strapped for many years to come and not bother ?  The answer of course if very much up to the choice made by the future King Charles III !

Whilst research shows it is true that all of Victoria's regalia [except of course for the short crown or tiara which she wore most of all] were of the St Edward's crown type, and that in 1901 Edward VII had a make over using the Tudor crown, it isn't true that one is male and the other female. Calling it a Queen's Crown is only relevant because our Sovereign Lady chose that option.  History shows us that the St Edward's crown was used well before Victoria came to the throne by two monarchs who were both male, namely George III and George IV, and crowns on buttons and badges were not used until 1812 so no need to look further back than George III who ruled from 1760 until 1820.  Whilst researching this subject I have come across five different button styles each showing clearly the shape of crown used. They are shown below.

Looking back, I am quite surprised that the Government would spend all that money in changing over the crown pattern [which affected every service including police, fire service, courts, commerce [By Royal Appointment etc], stamps, seals, money etc etc, and all that at a time when Britain was still on rationing and recovering from the War.  What a waste of much needed money.  I believe that we now live in a more aware and pragmatic society where the general public are not as pro-royal as they were in 1953, and they are less likely to agree to that spent {except for new money} when the time comes to change the monarch. Moreover, we live in a less theatrical society, and the need for fashion changes, especially those which are not necessary, will be low on the list in a cash-strapped country  where cuts to important front line and necessary things are mooted never mind the proverbial cuts affecting general living standards.

I leave you with a few of the changes which occurred in the 19th and 20th century.