NEVER AS LONG AS HIS ARSE LOOKS DOWNWARDS!

I note that a person who frequents the Ganges Association Forum and who is known to have a past with a big question mark after it, is now claiming [by inference] that he was something HE WASN'T, when in the Royal Navy.

The man is insufferable, now given to cheating by claiming a badge he is not, nor ever was, entitled to.

On the Ganges Association Forum, I see he is now using as his ICON, a much revered badge which

belongs only to a CCY [and before him to a CYS], a Scale 'A' Chief Yeoman.

Never in his dreams would he have ever attained that rate, even if he had served for more than his 7 years mans time.  He joined in 1955 and left in 1966, boy's time not counting towards his service. Thus, he was a part timer, a 7&5 rating. The following picture [thumbnail] is scanned from part of a data page in my naval records, and by the way, I knew somebody who had served with him in his last ship, the LION, who tells me that Thipthorpe was a waste of space and better off outside anyway.  He also mentions that he was a submariner. Well that he was, but like his naval service, it was such a short lived affair that if you blinked, you would have missed it on his Service Certificate. Including his time in the 'Brown Area', the name for the basic submariners training area and S.E.T.T. [Submarine Escape Training Tank] in HMS Dolphin which was a six weeks course, he served for one year {52 WEEKS} from November 1961 to November 1962 as an LTO [new name for killick bunting], meaning that he had less than twelve months on a submarine proper, which in his case was HM S/M Andrew. For the first three months onboard {12 WEEKS}, a new submariner studies for his Part III examination.  After three months he undergoes an oral examination conducted by the First Lieutenant and an ERA.  If he passes that, he is allowed to wear a submariners badge and to call himself a submariner. Thus he would have served as a submariner 52 weeks - 6 weeks Dolphin Training - 12 weeks Part III training in Andrew for a WHOLE 34 weeks.  Hardly a 'deeps' or a 'fish head'.

To get this badge by merit, one had to be clever, studious, professional, experienced and highly recommended and HONEST, and not a bull-shitter as this man clearly is.

Have a look at this badge.

His use of it is a direct insult to all CYS/CCY of my time in the Service and I am sure that they would readily agree with me.

I feel this gives us all carte blanche to use whatever symbol we want irrespective of the offence it causes. 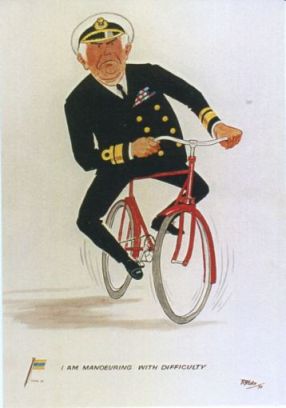