THE SOON TO BE 'THE OLD AGE SAILORS' OF THE ROYAL NAVY!

Have you read the PUBLIC SECTOR - PENSIONS FAIR PLAY report, written recently [March 2011] by Lord Hutton at the request of the coalition Government ?

If you haven't, try reading it: I recommend it Hutton Review of fair pay in the public sector - HM Treasury and the only reason I mention this is that the Royal Navy is an integral part of the PUBLIC SECTOR/SERVICES.  We [the RN] along with other Armed Services, are what the Government calls "the uniformed services" and that group also includes the police and the fire brigade.

I can never see quite why we should be linked for any kind of remunerations with the police and fire brigade [or any other organisation for that matter] because I fully subscribe to the reason for the 'X' factor which clearly rules out the non armed forces personnel. That 'X' factor is even recognised in our armed forces pensions!

In my day, and prior to 1970 when the Fleet Chief Petty Office rate was introduced, the vast majority of men were fully pensioned at age 40 with officers being pensioned after sixteen years commissioned service. Obviously some ratings served for longer than their '22' and many officers served for periods far in excess of their necessary '16'. For the older times, i.e., for those who served in the times before the changes below were brought into effect, say my case, leaving the navy to pension in 1983 after 30 years, have a look here http://www.godfreydykes.info/LEAVING_THE_NAVY_30_YEARS_AGO_AFTER_A_CAREER_OF_30_YEARS_1982_DATA.html

From 1972 onwards [the date the first of the FCPO's was promoted] serving for these men became mandatory out to age 45, with more than generous longer service packages being offered to CPO's and exceptionally to PO's.  Serving on the active-list as a rating until the age of 50 was almost unheard of, and to go on to the age of 55 was a pipe-dream, for many a rating would have welcomed that opportunity.

Then in 2005, the pension covering the years outlined above was totally revamped and split into two pensions schemes. Basically all those who joined before 6th April 2005 were shifted to AFPS 75 [Armed Forces Pension Scheme 1975] which in the most important aspects maintained the status quo of the pension system most of us knew and benefitted* from.  Those joining after the 6th April 2005 were automatically entered into the AFPS 05 scheme which was/is very difference from our time!

* Remember of course that then as now, our pay was abated to take account of our pensions, meaning that had the pension not been offered, our pay would have been greater so our pension was part contributory. However, you will note that the MOD specifically states that the navy pension is Non-Contributory, which measured against a civilian system where workers actually have a deduction shown on their  pay packet to help pay for their pension, is true.  Their statutory deductions are PAYE, NI and PENSION contribution whereas we have only two.

At a recent 'head-count' {2011/12} there were 198 thousand active members in the AFPS [Armed Forces Pension Schemes - Army, Navy and Air Force] with 406 thousand deferred members and 399 thousand pensioners or their dependents receiving some amount of armed forces pension. The AFPS is the 5th largest scheme in the public sector out of eight active schemes which are in top down order:-

It is a final salary scheme with the maximum pension and lump sum [3 times annual pension] available after 34 years as an officers and 37 years other ranks.  This gives a pension worth 48.5%  of what is called "representative pay" plus the lump sum.  In the AFPS 05, a pension after 35 years is worth 50% of final pensionable pay.  This accrues at a rate of one 70'th each year for up to forty years.

All Armed Forces Pensions are unfunded, which means there is no separate fund to call upon and they are paid out of general taxation, not from the Defence Budget. The employer, as in all cases has a commitment to contribute towards these pensions and the more people they employ the more they pay into the tax system - rather like the National Insurance Scheme.  In this case, the MOD is the employer and it pays [towards these pensions] the equivalent of 37% for each officers salary and 21% for each other ranks salary. The actual funding costs across all members was 27.6% of all salaries in 2009-2010, forecast to rise to 29.5% in 2010-2011 and 34% in the years 2011-2012, 2012-2013 and 2013-2014. In 2010-2011 its liabilities were £121B and the average pension paid was £8693 {a low figure but remember that many officers commuted to the full resulting in a low pension}.  As from the year 2011, the AFPS increase in line with the CPI and not with the RPI, effectively meaning that we dip out: we are short changed!

Those on the AFPS75 could elect to change over to the AFPS05.  However, as time moved on, the norm became the AFPS05 and that is what we will concentrate on.

In AFPS05, ratings get their pensions when aged 55 - no sooner, unless discharged with illness.

If you leave before the age of 55 and you have completed 18 years service and you are at least aged 40 {as it was back in our time and now known as EDP 18/40} you have to wait until you are 65 before YOUR PENSION IS PAID.

That is not as cruel as it sounds, because although there is no pension payable, there are benefits under an EDP [Early Departure Payment] scheme.  These are as follows. First off, the man is given a PRESERVED ANNUAL PENSION {PAP} [calculated on his service record and very similar to the pension he would have received were he to leave at age 55 which increases year on year to CPI levels] and from this PAP he is given income payments of 50% of its value - a kind of a mini pension.  He is also given a tax free lump sum to the value of 3 x PAP. It is not until he become 65 that he gets the other 50% of his PAP as income, when the EDP stops and his full pension is restored or awarded. Regrettably for these men, that age 65 is moving right very soon to age 66 and soon after will climb to age 68 in line with the Governments guide on when Social Service OAP pensions are paid.

Not too long ago, the fire brigade decided that in the light of Fair Play on Public Sector Pensions [namely the amount of money the tax payers should fork out for these pensions] they would pay pensions from the age of 60 instead of 55.

Lord Hutton seized upon this point and since the fire brigade is a part of the Uniformed Services, it would be better were all [including the armed forces] to pay pensions from that age also. 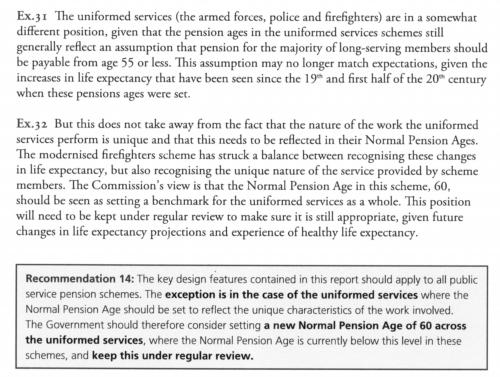 In recommendation 14 below left, the reference to 'key design' features which should apply to all public sector pensions except for the Uniformed Services, refers to moving the retirement age from the existing 60 to 65 and thereafter in line with all pension payment ages. This will quite naturally affect and no doubt disgust all civil servants, doctors, dentists, school teachers, local council workers and many more.

Lord Hutton's report has been widely accepted in Government circles as being an excellent contribution to the problems of Fair Play in pension payments.  The Chancellor is now studying the recommendations [which are thought to be a goer] and the outcome will be made known in the Autumn of this year.

If accepted, it will have far reaching consequences for the armed forces moving the RN's current age of drawing a full pension out to age 60, an amazing twenty years difference from the norms of the early 1980's.

It will also create, for obvious reasons, much older men defending our country.  Is that wise ?

In summary, what the armed forces need is to be given a UNIQUE status with no peer groups. That the age of 55 should be kept or even lowered for retirement and that the age of 65 for the transition from EDP to Full Pension should be set-in-stone.  Above all else, the highest of inflationary Indexes, currently the RPI [Retail Price Index] should be used for armed forces pension increases in each September and not the lower of the two, currently the CPI [Consumer Price Index]. The armed forces deserve something better than civilians and for this purpose policemen and fire-fighters are civilians.

Just a little quip: in my navy some of the sailors [naughty ones in my book] went RDP [Run Down Period meaning that they had let the end go, not many weeks or months to serve so what the hell, they didn't care any more] but in today's navy, they go EDP [as above].  Just a thought !