Our TIRED and KNACKERED Navy

One of the ways of assessing our navy of today, is by looking at a book called ACP 113 [Ships Callsign Book].

In this edition, the ships controlled by the Royal Navy are shown to be 292.

Thus, the navy CANNOT support further cuts as proposed by the Coalition Government. SEE BELOW for update after the Defence Cuts were announced on the 19th October 2010, and also to view the March 2010 BRIDGE CARD.

Our less than modern fighting navy consists of:-

but as I say, some of those have gone and some of the listed are yet to come.

These are in type order as shown above:-

A further 44 warships are listed as follows, shown in alphabetical order and not by class:-

The following vessels are listed as being under Navy control.  They are RCLV and RCTV, 13 in number,  respectively, Royal Corps Logistics Vessel and Royal Corps Transport Vessel:-

When I was a boy in the 40's, UTILITY WEAR was accepted as nowhere near the best but it will do because of the war shortages ! Now we see a list of 26 LCU's, LCU meaning Landing Craft Utility:-

Now to really scare the enemy, 61 auxiliaries of all sorts and sizes:-

They even add the leisure side of the navy into these lists! Here are the yachts [16 of them] attached to the naval college at Darmouth:-

And finally, no navy is worth its salt unless it has listed under its warship list {the very reason for having ACP 113}, 29 yachts belonging to the Joint Sail Association Training Centre

In summary, of the 292 vessels listed in ACP 113 as being under UK Naval Control, we have well fewer than 50 recognised fighting vessels.  Manifestly, an under sized, tired and almost threadbare navy. Lamentable !

Click to read the MARCH 2010 BRIDGE CARD. Note that HMS Bristol's callsign is not shown. She now uses the radio callsign 2AIT7 !

This picture was taken on the day the defence cuts were announced. HMS ARK ROYAL, pile of scrap metal, alongside in Portsmouth Dockyard. 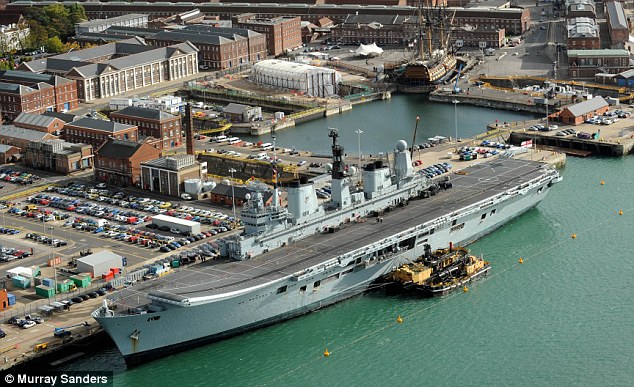