Depending upon the speed of your broadband, you may hear audio immediately on opening this page. Certainly it will be the case for Infinity users. The audio relates to a video which can be found further down the page. When you get to it by reading the page from the beginning, you can always refresh your browser to re-run to see the picture as well as hearing the audio.

Before moving to the National Memorial story, which is in Staffordshire, we want to mention two other Memorials which now bear Ian Molyneux's name. The first one is fittingly in the arms of the submarine world at their Museum, Gosport, Hampshire, adjacent to the former HMS Dolphin the original home of the Royal Navy's submarine service. This photograph shows Gill with her four children Jamie, Arron, Beth and Charlie at the unveiling ceremony at the former submarine base in early 2012. 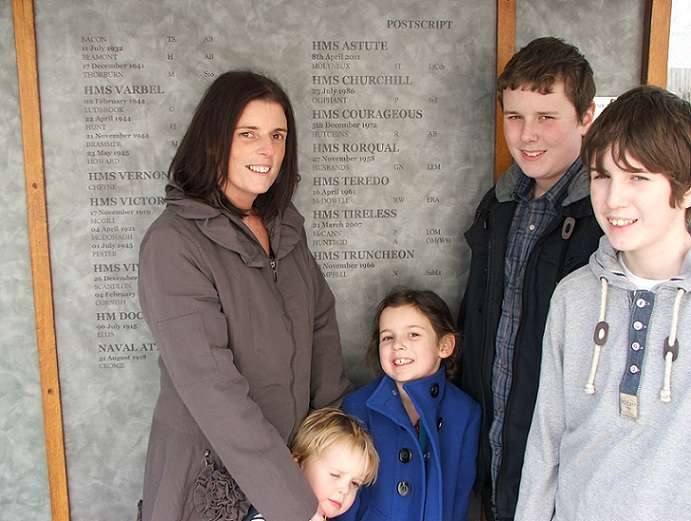 The other Memorial, a much closer to home tribute, has recently been added to the War Memorial in Ian's home town of Wigan.  Gill and her family will attend the Remembrance Day Service at this Cenotaph this year, 2012, the first with Ian's name proudly displayed.

The National Memorial Arboretum is a very moving innovation to witness and to pay homage to. As each new year starts, the names of those who die in that year whilst on duty and active service, are collated and compiled and when that year ends, they are added to the Memorial. In the following year, all their next of kin are invited to attend a private dedication for the dead of the preceding year, and regrettably, this goes on, year after year, to commemorate the dead of our Armed Forces. What follows concerns Gill's invite to the 2011 Dedication. For those of you who have not yet had the opportunity to visit the NMA, this rather large photograph, gives a stunning view of the Memorial. It might take a little time for it to download but I know that you will find it a worthwhile wait. Infinity users will see the whole picture almost immediately.  Whilst waiting on slow/slower broadband connections, you can scroll down and continue the read below starting with the video, clicking first on your REFRESH button.  Use your scroll bars to navigate the site/picture. Make sure that before leaving the picture to view what is below it, that you place the bottom horizontal scroll bar over to the left. 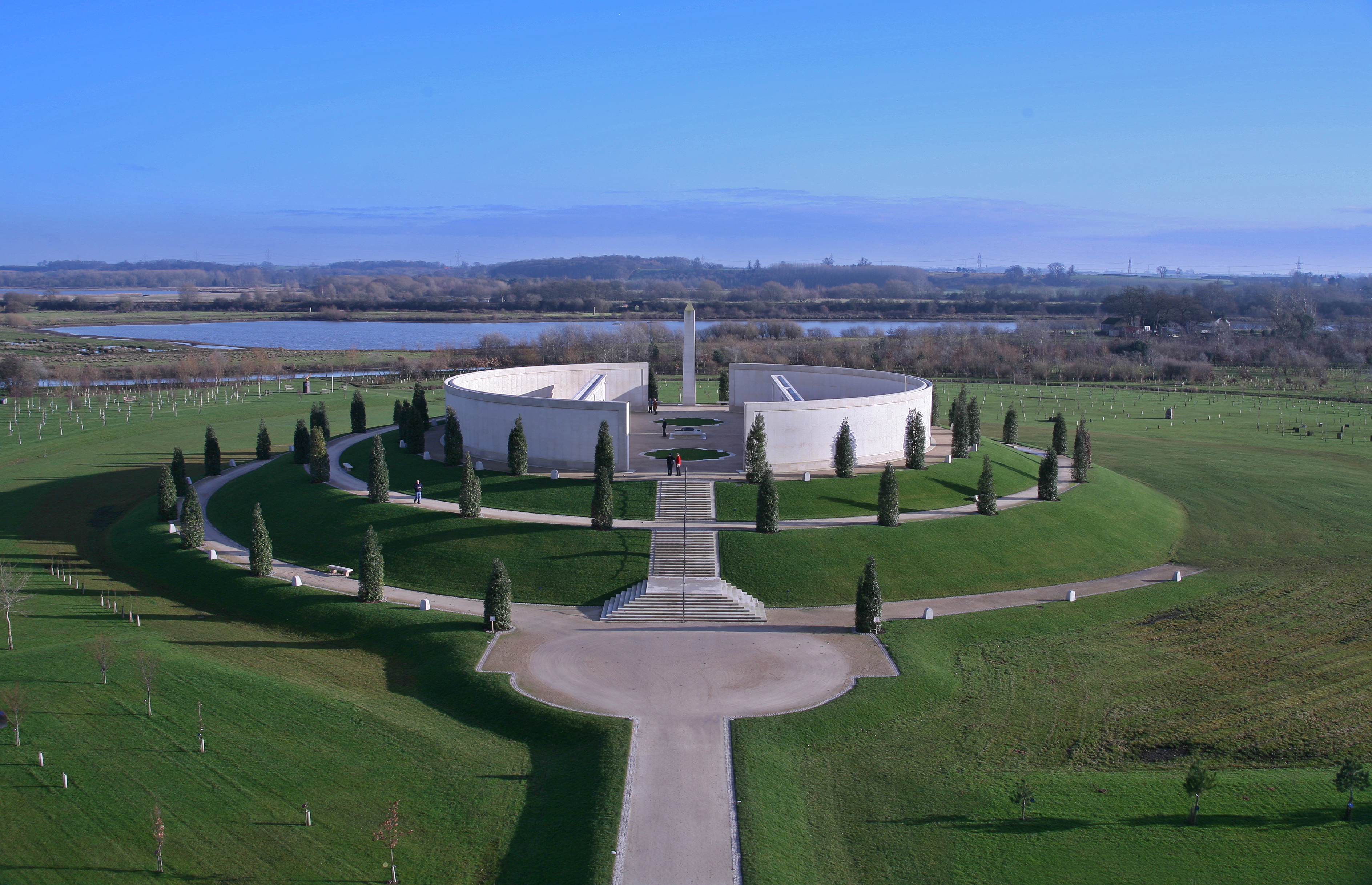 To re-run this video, simply click on your REFRESH button.

One of Gill's three awarded tickets giving access to the private ceremony. 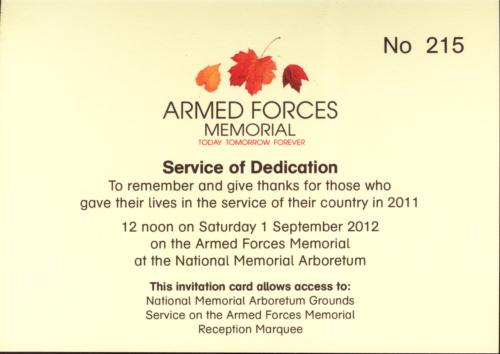 The picture below shows Ian's name with his George Medal, posthumously awarded on the 23rd March 2012 almost a year after his death. Gill is due to attend the Palace for a private meeting with HM The Queen in November and to receive the George Medal.

The Programme of Dedication shown above in the PDF File, rather strangely omits the Honours and Decorations of the fallen whilst adding them for all who officiated at the Service, with the exception of the Second Sea Lord whose Knighthood, although mentioned,  omits his KBE, awarded in the Queens Birthday Honours 2012. 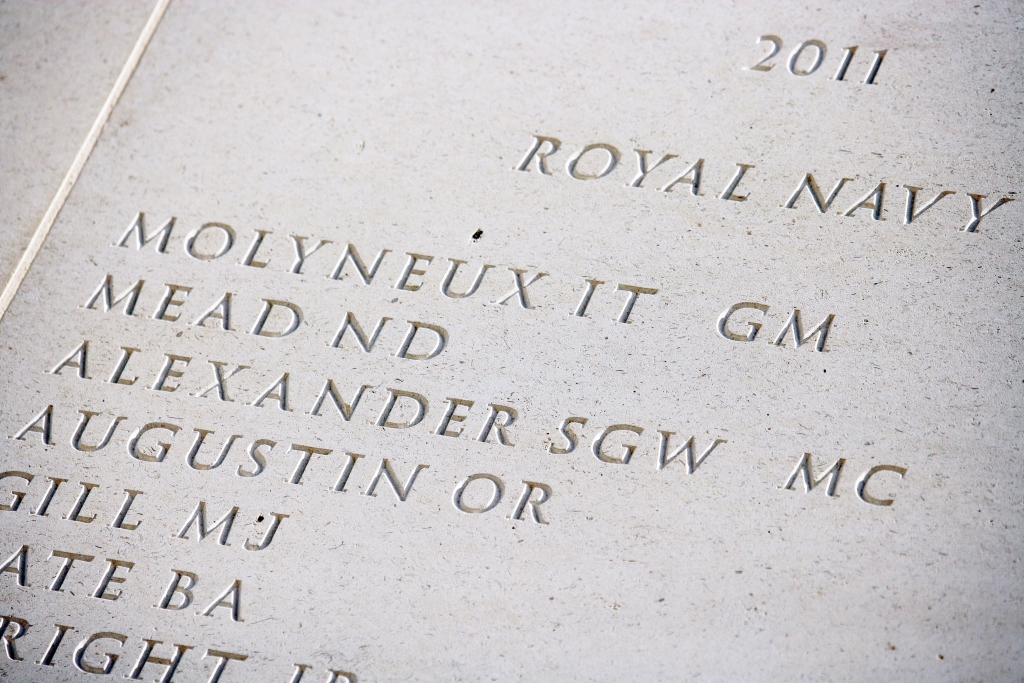 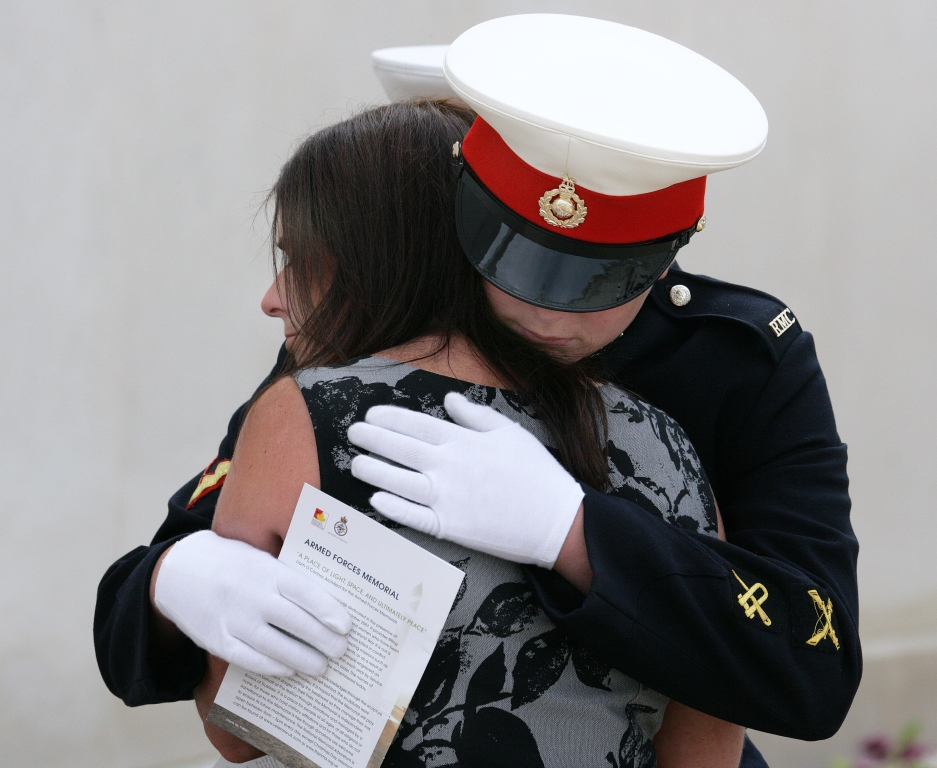 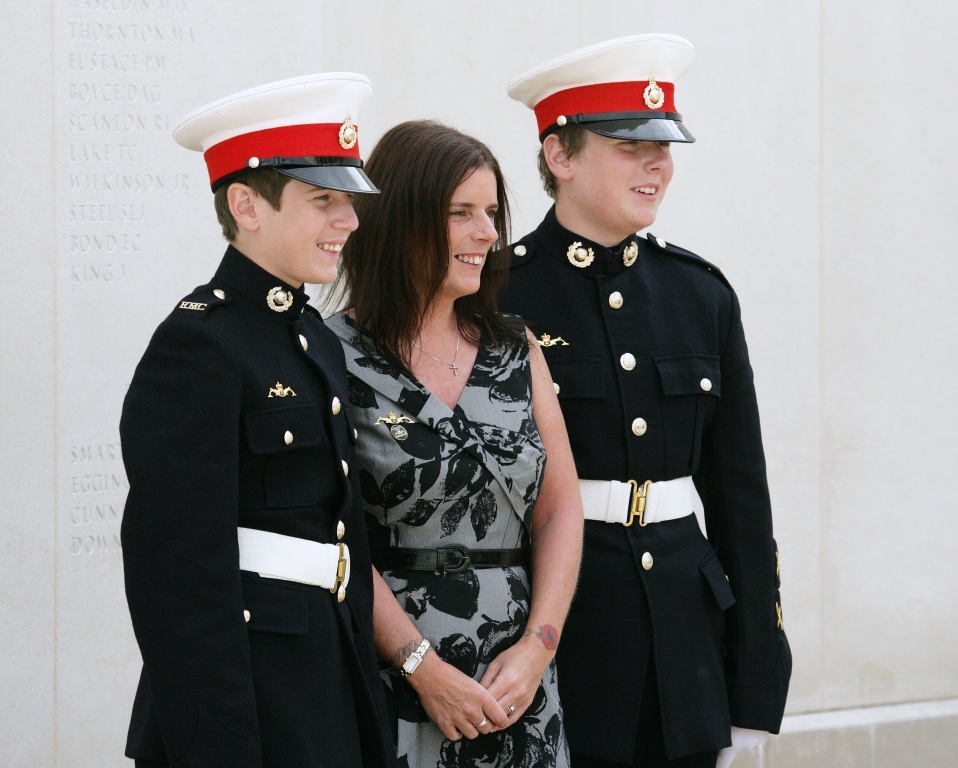 Gill escorted by two of her sons Arron aged 13 [left] and Jamie, all three proudly wearing their Dolphins. 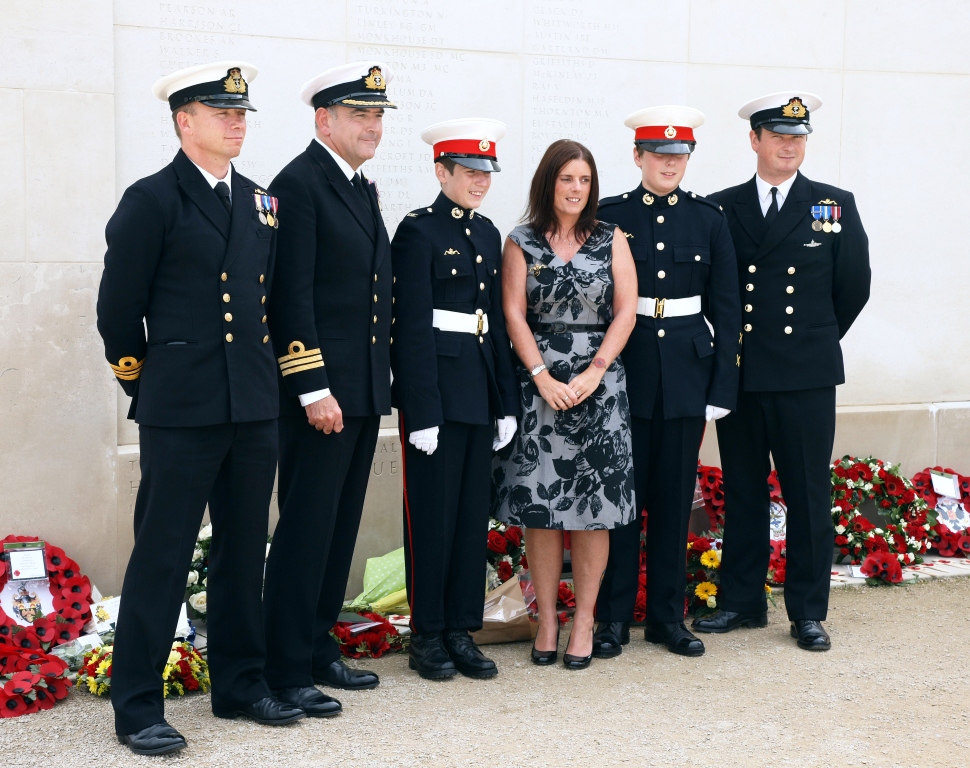 After the Dedication Service, wreaths and flowers were laid under the Memorial walls bearing the names of the fallen. The officers in this picture are from left to right:-
Lieutenant Commander Chris HODGE RN, the Marine Engineering Officer [MEO] of HM S/M ASTUTE who was shot and badly injured whilst his opposite number, the Weapon Engineering Officer [WEO] Ian Molyneux was shot dead. Next is the Commanding Officer of HM S/M ASTUTE, Commander Iain BRECKENRIDGE RN and then Lieutenant Commander Richard BOWIE [the WEO of an SSN based in Plymouth] who joined the navy with Ian and who were bosum friends. Ian, Richard and Chris all joined the navy as ratings but were commissioned onto the General List. 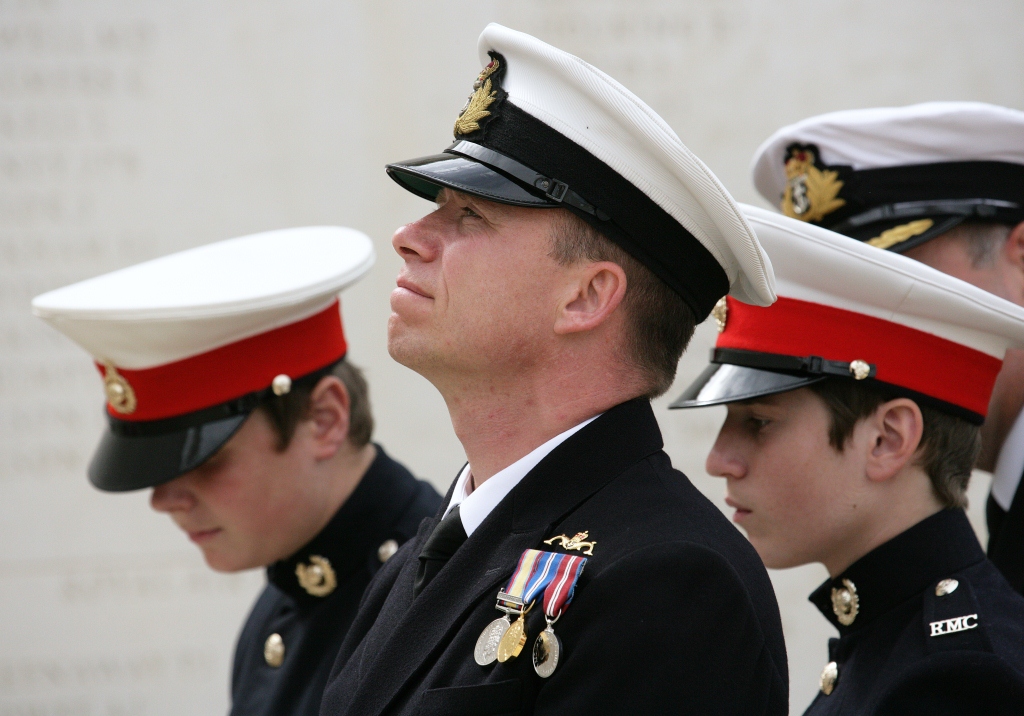 Penny for your thoughts? The sad picture of two sons of Ian listening to the Service whilst Chris HODGE, who was badly injured in the shootings, contemplates what might have been!

The title of this page is A NATIONAL DEDICATION for Ian and those lost in the year 2011.

What follows, continuing the theme of dedications, is a Dedication celebrated in his own home town of Wigan on Friday the 27th June 2014.

At a date prior to the Dedication, a plaque was added to the town's splendid war memorial which stands proud outside the entrance to All Saints Parish Church in the centre of town, which to say the very least, is a beautiful and historic building. 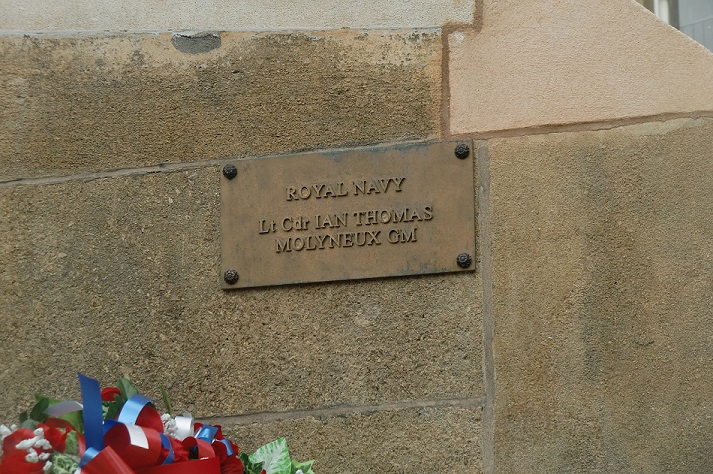 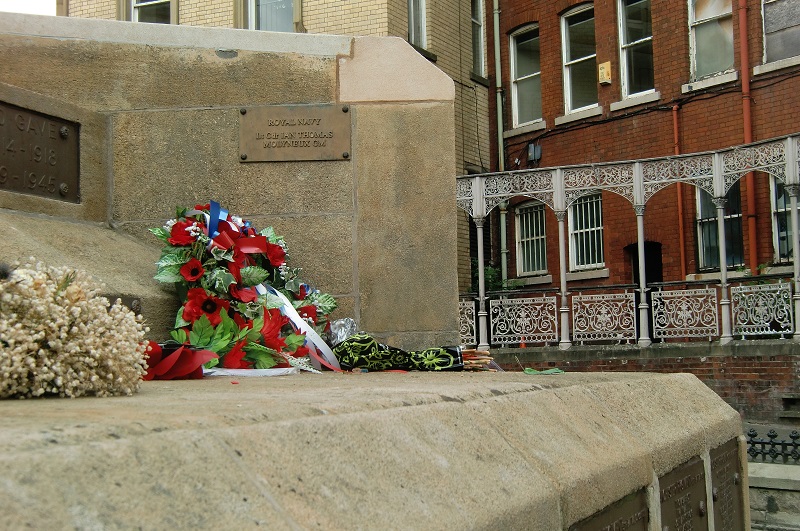 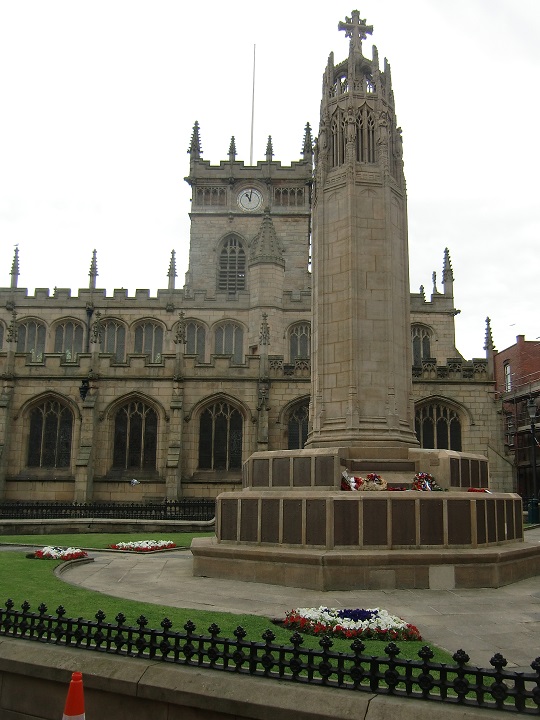 The Dedication was covered by the camera and the pen, and was published locally in Wigan newspapers as well as featuring on local TV channels.

This first entry shows the Service programme. The Service was conducted by the Rector of All Saints, assisted by a Roman Catholic Priest who read the Naval Prayer.

From the written news media comes this article from ITV Granada

and from the video news media comes a very small coverage of the final part of the Dedication. It was just one of many videos covering all kinds of subjects, wrapped up with commercial advertisements and movie previews. The core subject only has been captured and made into a WMV [Windows Movie], with the rest of the moving images deleted.  There is no sound associated with the clip.

In the short video clip above, the Mayor of Wigan, Councillor Phyll Cullen [dressed in a blue suit] can be seen standing next to the Deputy Leader of Wigan Council, Councillor David Molyneux [no relation to Ian] over to the left of the family group. The two clerics stand next to one another, the Rector in gown and the Priest in lounge suit. Gill and her children led the family and friends group, which were many in number. One guest in particular was Chris Hodge who was a good friend of Ian's and now a very close family friend of the special kind. He was also a Lieutenant Commander serving in Astute with Ian, and he like Ian, was shot and severely [near fatally] wounded by the same gunman. Fortunately he survived but only because of the skill of the several surgeons who rebuilt his shattered body. Chris currently serving ashore, leaves the Royal Navy early in 2015 to seek a new adventure! We wish him well.  Another nice gesture was the attendance of a Lieutenant Commander RN representing the Senior Naval Officer in the North of England. It was also good to see that Gill's friend and anchor throughout this long grieving period, Patricia Clements {see the Inquest page THE_INQUEST}, was able to be with the family on this occasion.

Also seen in the short video, are  the children led by Gill, picking up the wreath [Gill and Bethany] and placing it upon the Cenotaph just under Ian's plaque. After the final positioning executed by Arron and Jamie, Arron steps away leaving Jamie to give a smart salute to the Cenotaph and to his dad. No doubt, that he and others will salute in the same manner as each year brings around Remembrance Day. Note how little Charlie [6] is made aware of the solemnity of the occasion, and stands still,  almost to attention, whilst his elder brother Jamie salutes.