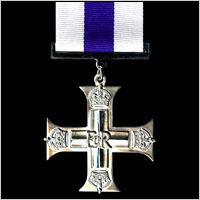 This is Kate Nesbitt, a junior rate medical assistant and a gutsy young women, who on the 12th March 2009, through her extremely brave and spontaneous action on the field of battle in Afghanistan, won for herself, her family and friends, her Service and her Nation the exalted  award of a MILITARY CROSS.  Kate is the first female sailor in the British navy to be so honoured and saluted, and inevitably for posterity, to become yet another naval icon symbolising all that is good and meritorious in the Royal Navy, and there is much of it. Apart from the sheer pride this man has for Kate, he also owes her his life and his name is Jon List - see Story line Two below. The picture above is taken at Buckingham Palace on Friday 27th November 2009.    It is also silly and perhaps wrong of me to mention this, but on such a special and historic naval occasion, it would have been so much nicer to see Her Majesty at the Investiture Ceremony: still our future King is a good second best ! 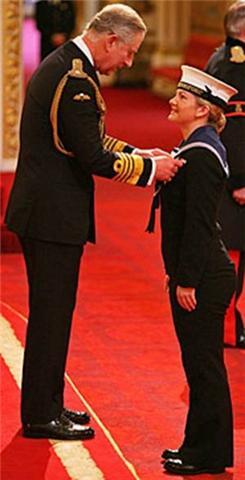 and two more pictures.  Kate proudly wearing the ribbon of the Military Cross, and Kate as part of a fighting group of Royal Marines

That Kate's story will eventually be part of British history on the pages of a book yet to be written is not in doubt, but the current coverage of her story will regrettably soon wane when there is a 'new' story to fill the front pages of newspapers, magazines and media websites/television broadcasting, which as always and for obvious reasons, are said to be "today's news tomorrow's fish and chips wrappings".  Thus it is important to 'capture' this story and to place it on a naval website where it will remain, hopefully for many years to come.  I am placing her story here on my site {which I consider to be navy orientated} as a temporary expedient, but if no grander or official website chooses to take over as it were, then I will proudly keep it for all to see and to remember.

I am grateful to the website "This is Devon.co.uk" from whence this story comes.  Thank you.

THE first woman in the Royal Navy to be awarded the Military Cross said that collecting her bravery medal at Buckingham Palace was "the proudest day of my life".

Medical assistant Kate Nesbitt braved Taliban fire to tend to a comrade shot in the neck during a gun battle on her first tour of Afghanistan in March. She repeatedly demonstrated courage under fire as she rushed across open ground to the aid of injured colleagues from 3 Commando Brigade Royal Marines.

The incident happened in Nawa, near Lashkar Gah, just three weeks before she was due to return home after a six-month deployment.

The Able Seaman Class 1, of Whitleigh in Plymouth, dressed the wound and kept the soldier from losing blood while bullets and rockets flew overhead in the Marjah district of Helmand province.

She said: "When it all happened, we were in the middle of an operation but I wouldn't in a million years have thought anyone would follow it up. It was the biggest shock when I got the news (of the award)."

"It made it all seem real being here today. It has been so special. When I looked over and saw my mum and dad in the audience, it was the proudest day of my life."

The soldier she saved was Lance Corporal Jon List, from Holsworthy, North Devon.

The 22-year-old, who still has the bullet scars on his neck, tattooed the attack date 12.03.09 on his arm, with the slogan "What doesn't kill you makes you stronger".

He said: "I felt the impact go through my jaw, and the next thing I knew, I was on my back. I thought that was it.

"Kate appeared from nowhere, reassuring me everything would be OK."

He added: "Kate says to be called a hero is too much, I say it could never be enough."

His mother, Debbie Merritt, told the Western Morning News: "We are so thrilled for Kate that she has received the recognition that she deserves.

"Without her aid, we would not have Jon with us today, and there are no words to explain our gratitude to her."

The sailor is only the second woman in the armed forces to receive the medal but said: "It doesn't really make a difference. I was really overwhelmed that they trusted me to do the job and never doubted me at all, that's what was important."

"I just did what I'm sure everyone else would have done for me."

Her citation said: "Under fire and under pressure, her commitment and courage were inspirational and made the difference between life and death. She performed in the highest traditions of her service."

The 21-year-old, who stands 5ft tall, is now working in the surgical assessment unit at the Military Hospital Unit Derriford.

She said: "In the UK, we are receiving terrible injuries on a daily basis and it is a tough job, but nothing compares to having to treat one of your colleagues that you have worked alongside for weeks."

After attending Sir John Hunt Community College in Plymouth, she joined the Royal Navy in 2005 and, after medical training, served at the Commando Training Centre in Lympstone, Devon, followed by a deployment on the destroyer HMS Nottingham.

THE Westcountry soldier who survived after being shot in the face has hailed the woman medic who saved his life as more than a "hero".

L Cpl Jon List, from Holsworthy, North Devon, was treated for 45 minutes by Able Seaman Kate Nesbitt, from Plymouth, while under heavy gunfire in Afghanistan.

He was choking to death on his own blood after a Taliban bullet shattered his jaw. Sailor Kate, 21, who was attached to 1st Battalion, the Rifles in Afghanistan, opened a second airway so L Cpl List could breathe.

On Friday, she was awarded the first Military Cross ever given to a female sailor. Her citation said she showed courage under fire that was "inspirational and her performance was in the highest traditions of her service".

L Cpl List, 22, who still has the bullet scars on his neck, tattooed the attack date 12.03.09 on his arm, with the slogan "what doesn't kill you makes you stronger".

He said: "I felt the impact go through my jaw, and the next thing I knew I was on my back. I thought that was it.

"Kate appeared from nowhere, reassuring me everything would be OK."

He added: "Kate says to be called a hero is too much, I say it could never be enough."

He was airlifted to Camp Bastion before being flown on to Selly Oak Hospital in Birmingham.

L Cpl List's mother, Debbie Merritt, has described her son as "a walking miracle". She paid her own tribute on the Western Morning News website, writing: "We are so thrilled for Kate that she has received the recognition that she deserves.

"Without her aid, we would not have Jon with us today, and there are no words to explain our gratitude to her.

"She brought our son home for us, and he is well on the road to full recovery and fitness."

YOUNG naval medic Kate Nesbitt has become only the second woman in the history of the armed services to be awarded the Military Cross.

Able Seaman Nesbitt, from Whitleigh, Plymouth, has been described as a "hero" after details emerged of how she saved the life of a soldier in Afghanistan.

The 21-year-old described how she ran 70 yards across open ground to treat a horrifically injured comrade while Taliban bullets were "whizzing around" her head, claiming "I was just doing my job".

In receiving the Military Cross, Kate becomes the first Royal Navy service woman to have received the honour.

She was awarded the honour after heroically treating Corporal John List, of Chepstow-based 1st Battalion The Rifles, on the battlefield.

"Without warning, Taliban fighters opened fire having ambushed us," said Kate, who was aged 20 at the time and attached to 1 Rifles as a unit medic.

"Within seconds, I heard 'man down, man down' on the radio and I knew I was needed. I got the location details and sprinted 60 to 70 metres running towards him while under fire.

"All I was thinking was: there's a casualty and I need to be there. I just thought the quicker I get to him, the more chance I have to save his life. It was adrenalin.

"Whenever I went out on patrol, I hoped I wouldn't be needed. When the call came, I knew I had to step up to the mark."

Having crossed open ground to get there, Kate was met by Cpl List and a Royal Marine who was holding the injured man's head.

"When I first got there, I didn't think he was going to make it. I treated him for about 45 minutes and he was a mess. He was struggling to breathe and I had to provide him with another airway. The round had gone through his top lip, ruptured his jaw and come out of his neck. He was so lucky the bullet did not hit an artery. Bullets were whizzing around my head and shoulders and hitting the ground all around us. The Taliban knew that they had got someone and were targeting us."

Within a short time, the soldiers and Marines cleared the area of Taliban fighters and a Merlin helicopter arrived to fly Cpl List to hospital.

The incident happened in Nawa near Lashkar Gah, on a sweltering mid-afternoon day in March three weeks before Kate was due to return home after a six-month deployment.

The five-day operation was designed to push the Taliban away from the region in the run-up to the Afghan election.

The troops had been handing out safety packs and food, and reassuring the local Afghans.

After returning home three weeks later, Kate was keen to see how her patient was recovering.

She attended the 1 Rifles medals parade in Chepstow in May.

"He is recovering well," said Kate. "I found it all overwhelming really. He said he wanted to say a huge thank you to me. He couldn't talk when it happened so it was the first time I had heard him speak. His mum said if it was not for me, he would not be here today."

Kate said she was flattered to receive the Military Cross, and said she was still coming to terms with the honour.

"Being described as a hero is just too much. I did my job the best I could. It was just overwhelming to hear people say 'Well done' and that he made it through."

Her father, Clive Nesbitt, a former Royal Marine Colour Sergeant who served in Plymouth for decades, said: "Being here today, I would not have wanted her to have done that in a million years. She's very lucky. But she did it and I am so very proud of her.

"I cannot tell you what it was like sitting at home waiting to hear some news.

"I'm proud because it is what she wants to do, but it doesn't take away the worry."

Clive, 50, said he did not fully appreciate how heroic his daughter had been until she returned home weeks later. "It was a very courageous thing to do."

He said he also wanted to publicly thank 1 Rifles for "looking after" Kate.

We salute you Kate and thank you for being the best possible advert for the Royal Navy.