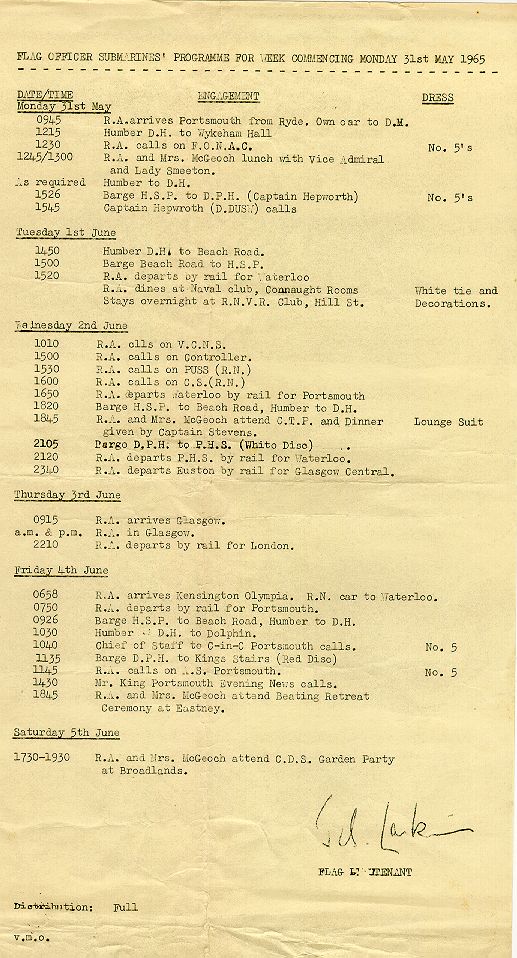 You may have gathered whilst reading my web site that I am a collector-maniac: truly I am.  I have many large volumes of papers and documents which I have collected as I have gone along during my 30 year career.

When I left the Navy in June 1983, my first civilian job was working with Vice Admiral Sir Ian McGeoch who had set-up a company called MIDAR. Look at this site for details of Sir Ian, submarine ace Ian McGeoch - Wikipedia, the free encyclopedia

In 1965, whilst between HM Submarine Auriga's commissions - the one I had completed to Canada, and the one I was  eventually to join to Singapore, I was in HMS Dolphin, the submarine base at Gosport Hampshire.

I had joined HMS Dolphin as spare crew which meant that I was shore based until I was needed in one of HMS Dolphin's submarines to replace personnel who were sick etc.  My luck didn't hold for very long because my opposite number serving in HM Submarine Grampus took sick, so I was back at sea.  However, it wasn't too bad because HM Submarine Grampus did not do long periods at sea, and even then, what she did do was stress free.

My opposite number returned to full health and rejoined the submarine, and I went back inboard to HMS Dolphin as a shore job.

Illness must have been common in those days, because shortly afterwards the Admiral's Yeoman, the man who looks after the Admirals Signals etc, went down with a bug.  Being a communicator, I was co-opted onto the Admirals Staff for two weeks, and much enjoyed my insight into top management.  I saw Admiral McGeoch just a few times, a man I admired for his famous war record in command of several submarines, and in one of them he was badly injured in the head. He was much decorated for his war time exploits.

During my time on the staff, I was given the Admiral's weekly programme which I used to make sure that his signals were always ready when he returned to HMS Dolphin no matter what the time of day was.

Can you believe that I found this programme nearly 40 years on?

The initials R.A. mean Rear Admiral but the other jargon/initials are too numerous to explain.

One thing of interest is the last item for Saturday 5th June 1965. Rear Admiral and Mrs McGeoch attend C.D.S Garden Party at Broadlands. C.D.S., was of course Lord Louis Mountbatten of Burma.

On the 3rd of January 1978, Flag Officer Submarines left HMS Dolphin for Northwood Middlesex {HMS Warrior} to be co-located with CINCFLEET - then the submarines left - and now HMS Dolphin has gone.  However, the actual buildings are still there but used for different things.  Eventually, the 'boss man' lost his super title of Flag Officer Submarines and became known as RASM [referred to as 'Rasum'] meaning Rear Admiral Submarines.