HOW MANY PRICKS WERE IN THE NAVY IN YOUR TIME?

[Good guess but you are wildly wrong!]

Well, you are wrong, simply because you have MISS OUT the 'pricks' I am going to talk about on this page !

I can safely assume that because the elderly are less likely to have a computer that most of you will be my age [now into my 70's] or younger, and my time is the period 1953 to 1983.  Thus, many of you will be remembering the times post 1953 and counting your known pricks from that start point.

I dare say also that many of you will consult that oft-misleading book Jackspeak for so-called naval definitions, and if you do, you won't find the definition of the 'prick' recorded on this page in that book.  Predictably, their definition is just less that rude or lewd.

So before us old un's fall off our perch, let me impart some very important 20th century  navy jargon.

The expression 'prick' was very much a thing of the senior rates mess, and even then, the Chief Petty Officers mess. It never affected the wardroom nor the junior rates, so, if you have never heard of this, don't be too surprised.  Now that you are a civilian [I imagine]  and neither a sailor nor an officer, you might like to catch up on your knowledge of the senior service and its customs.

There are many 'sayings' used in the navy which are semi or demi official, whose root word can be found in print somewhere in a naval library.  There are also just as many 'sayings' which were used on a daily basis, but which had no known root or true meaning, and yet the expression [or saying] was universally understood by the vast majority of naval personnel.  One such is a Pee Do, meaning a LSGC Medal [Long Service and Good Conduct] and another is Skate, meaning a sciver or a work-dodger.  Another was a 'prick', and this is the true story [ask any of your sea dads today before they make their peace with the proverbial pearly gate keeper] of the use of that expression.

I am going to use a typical, long RN career, lower deck, example, to help me to explain this folk law.

In my time a boy joined HMS Ganges when he was 15¼ [the earliest one could join at the beginning of the 1950's].  From that date he joined as a Boy Second Class and during training was elevated to be a Boy First Class.  At some stage, whilst still at Ganges, he was further elevated to become a Boy Telegraphist [in my case] - three promotion from joining to going to sea when aged 16½ [15 months Ganges training].

When aged 17½ the Boy Telegraphist became an Ordinary Telegraphist [an O.D.] and upon achieving the age of 18, he started his mans time.  Hence, the first 2¾ years counted for nought.  This nought thing hurts [in a way], because I am the first to tell people that I was in the navy for 30 years [and indeed I was] but in reality, I was in the navy for 30 - 2¾ = 27¼ years mans time.

From that magic age of 18, one served for two years until the day before ones 20th birthday in a TWILIGHT ZONE.  It was NOT called anything specifically, BUT it was the period  pre-grog,  pre-prick time.  During this time [or possibly before] one was elevated to the Able Rate to become a TM, a Trained Man.  So, we have come through boys time and twilight zone time - 2 steps up the ladder as it were. Incidentally, from that point onwards NOW AGED 20,  [and being a TM], one could remain at the that rate for the rest of ones career without undue pressure being applied to encourage further promotion.    At this time also, one was elevated from being 'UA'  [Under Age] to 'G'  [Grog] unless, and nobody ever did,  one elected to become 'T'  which means Temperance - an abstainer !  That means one took part in the time honoured ceremony of drawing ones tot and the socialising [unofficial though it was] that went with the event, effectively becoming a MAN in a MANS navy.

I have mentioned that mans time starts when aged 18 and in the early 50's that meant the start of a twelve years stint to age 30 with the option of serving seven years in the Royal Navy [until aged 25] and then a further five years in the Royal Fleet Reserve [until aged 30] which a vast phalanx of men chose, me included. There was no other choice on the table - that was the lot of all Royal Sailors.

However, at that point, one started ones FIRST 'PRICK', and 'prick' in the Royal Navy means a FIVE YEAR MANS TIME PERIOD.  A man who opted for a full 12 years stint did his FIRST and SECOND PRICKS in one go, leaving after two five year periods measured from the age of 20 at aged 30.  A man opting for the 7 and 5 options who left at age 25 was excluded from the count, but had he stayed in for the full twelve, his count is as though he had been a 12 year man from the onset of his time, although a 7 and 5 year man was paid less than a 12 year man.  Whichever way travelled, we are at a point when our man is aged 30.

Now comes his decision to continue in the Service using the next PRICKS available to him.

By the 1960's there were other choices of Service, chief of which was the 14 year option, but later on a 9 year option was introduced. Notwithstanding these options, PRICKS THREE TO SIX brought our man, should the Service require his RATE and his career to date, to the ripe old age of 50.  He served them as follows:-

Prick Six was the maximum one could serve as a lower decker in the Royal Navy.

I myself served a Fifth Prick.

Now, I am reliably told that 7 and 8 pricks are available taking certain personnel to the age of 60 before leaving the service. 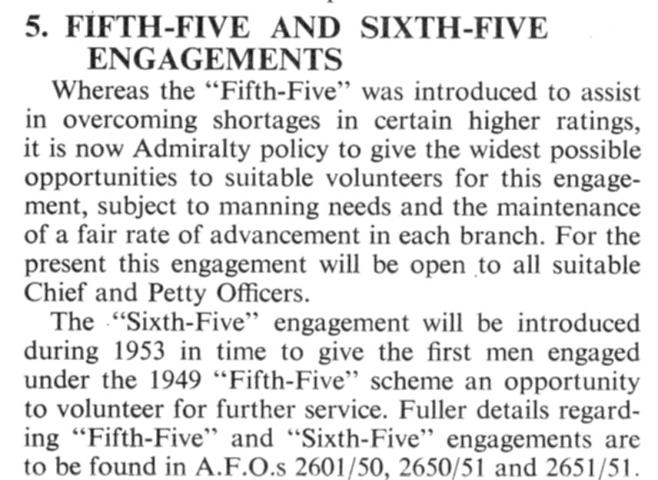