Two pictures to share with you, but first a little bit of info.

I joined Auriga [S69] from HMS Dolphin ex HM Submarine Grampus [S04] as the Radio Supervisor on the 15th July 1965: I had already been the RS of this boat on her last commission [1962-1964] in SM6 based on Halifax Nova Scotia Canada, but left it for the duration of the refit I am about to mention below. I was therefore fully au fait with her and my job in her from the second I rejoined her.

At that time she was in RGP [Refit Group Portsmouth] having been fully refitted and we sailed North to Faslane for our work-up. Our skipper was Lieutenant Commander John Round-Turner Royal Navy.  We left the UK in early January 1966 remaining on the books of HMS Dolphin until the day we arrived in the Far East, in the Malacca Straits off Malaya when we were transferred to the books of HMS Terror circa 31st January 1966.  Whilst we lived in Terror when in harbour [that is until the wives of those to be accompanied arrived on the Island] as a ships company, our Depot Ship was the old LST HMS Medway which was moored to the jetty at the end of the HMS Terror Fleet Landing, a jetty sticking out in the Johore Strait. For four months [when in harbour and not "ploughing" the South China Sea] it was easy coming alongside Medway's jetty [she inboard and us outboard with the jetty in between]  and then walking directly into HMS Terror to meet our families or to the inboard accommodation messes. The submarine senior officer in Singapore at this time was Commander 7th Submarine Squadron.

On the 4th June 1966 our lives changed because HMS Forth arrived from the UK to be our new Depot Ship, carrying a more senior officer namely Captain 7th Submarine Squadron.  Sadly for us, her berth was to be at buoys midstream in the Johore Strait, which meant boat routines to and from HMS Terror to get to our boat. It also meant that we were subjected to a much stricter pussers routine by HMS Forth's joss man and regulating staff, which was more hands-on than had been their equivalents in HMS Terror. Forth did not last long and at the end of March 1971 as the British were pulling out of the Island, she left Singapore for the UK brought home by a 'steaming crew'.

Approximately one year after having arrived on task in the 7th squadron, our captain's were rotated and in place of John Round-Turner we got Roger Venables - sadly ! See Article No 5 on this page  http://www.godfreydykes.info/bits_and_pieces_volume_v.htm

My first picture is of Singapore naval base and dockyard showing the berth of HMS Forth and the Fleet Landing in HMS Terror that we used. 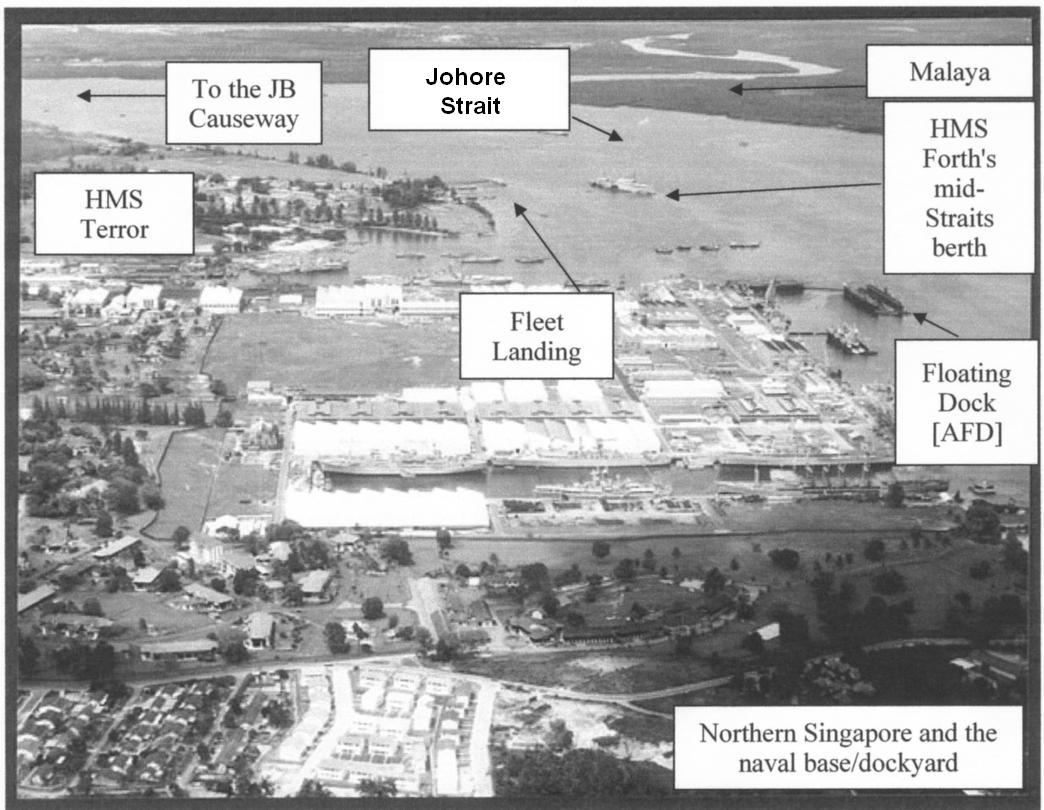 The long waterway you see in the middle of the picture with three large vessels on the western wall and fewer ships on the eastern wall is the Stores Basin and this was all that was left when the RN pulled out of Singapore and it was taken over by other largely Antipodean navies as well as by SAF [Singapore Armed Forces].  Being in Auriga was my second tour in the Far East. I visited for the third time in HMS Rothesay [F107] whilst on the foreign leg of her GSC [General Service Commission] in 1970, and my fourth time was in 1977/78 during Group 6 Deployment for HM's Silver Jubilee showing the Flag cruise, embarked in the flagship HMS Tiger [C20], and this is where we berthed.

My next picture shows a group of officers at dinner in Singapore's Admiralty House, guests of COMFEF [Commander Far East Fleet] Vice Admiral Sir Frank Twiss*. The officers were commanding officers and staff officers of ships and authorities which had taken part in a large exercise and this was the dinner after the wash-up.  The occasion  was March 1967. The photograph shows Auriga's commanding officer, Lieutenant Commander R Venables Royal Navy sitting immediately in front of you with his left hand resting on the chair. The officer to his left was not Sir Norman Wisdom!

*Admiral Twiss was fully at home in the Far East. He was in Singapore when the Japanese attacked and was taken prisoner.  He was a POW for three years.

After a pretty tough commission, we left Singapore, staying on the books of HMS Forth until back in UK, arriving on Dolphin's books just over two years from the date we left UK in January 1966 on the 22nd January 1968.