What follows are the inputs to the Royal Marines monthly Journal, the 'Per Mare', sent by the Royal Marines serving in H.M.S. HOOD. They all date from 1936, but there were months which were missed out [not submitted]. Some of the pages have been copied in full and therefore they have inputs from other capital ships carrying Marines, and some, which were difficult to process or which were difficult to read after copying, have been added piecemeal or retyped completely. The photograph of the Hood 'Power and Brain' comes from a 1920's book. If you have difficulty in reading the caption beneath it, it says "Beyond and above the 15-inch gun turret are the conning-tower, the 30-foot rangefinder, the bridge, searchlights and fire-control." The badges are of course the cap badge of the 'Royals' and the unpainted crest of HMS Hood. The calendars have been added simply for interest - note 1936 was a leap year.

In January's entry under BAND, the author mentions Beating Retreat. In June last year [2004] at the 60th anniversary of the D-Day landing of WW2, I used my camera to record the Royal Marine Band doing just that, Beating Retreat.  If you want to hear it, and 'raw' it is too, click here. Just imagine that you are in Gibraltar way back sixty nine years ago in 1936, sipping team with the Admiral, Sir Sidney Bailey and the Commanding Officer, Captain Tower R.N., on the Hood's Quarterdeck, listening [and the quality of this recording wont make that too difficult to imagine] to the Hood's RM Band crashing out this wonderful and much loved sound.

There was no input into the Journal by HMS Hood for the month of February 1936. 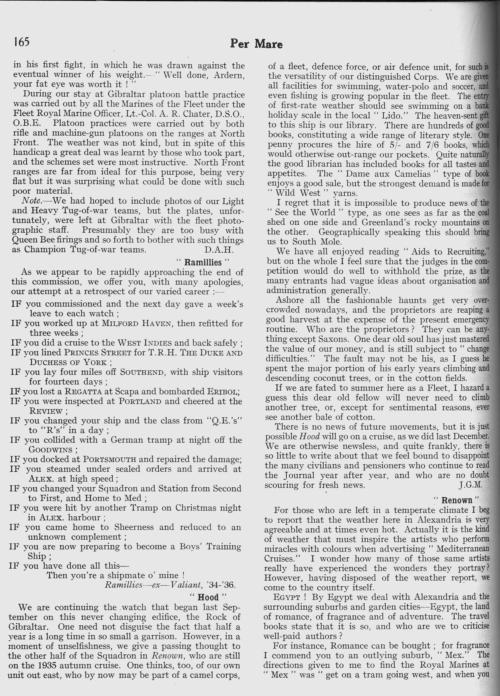 HMS HOOD did not send articles for the August and September Journals. 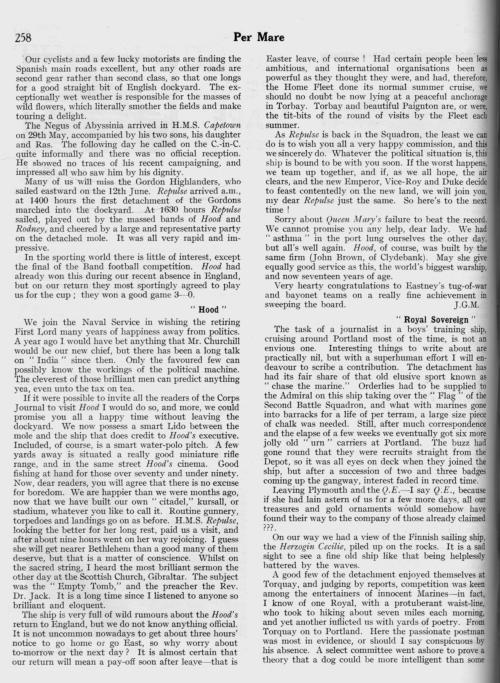 Finally, here's to the memory of H.M.S. Hood and her crew and all that she stood for. In this year 1936, the complement of HMS Hood was, throughout most of the year, 810 officers and men. See this Admiralty document for more details The health of the navy in 1936.  Her wartime complement was increased to 1200 but after her refit and new armaments fitted, her 1941 complement had increased to a massive 1418 {of which 1415 were lost in the sinking} with only three survivors, an uptake of 75.06%, making what may have been 'comfortable accommodation' into a vastly over-crowded environment.