This is a picture of HMS CONSTANCE just one of many of the Royal Navy's "brave ships".  Here she is seen wearing the pennant numbers D71, but during WW2, she wore R71.  Her radio callsign was GEFW {George Easy Fox William}. She is seen here passing Tigne Point entering Marsamxett Harbour in Malta, heading for Sliema Creek and "Destroyer Ally". Just 7 short years after the end of WW2, Constance was again fighting, but this time against the North Koreans/Chinese in the Korean War  [1950-1952].  So many ships took part in this war [and others since WW2] and all were thanked in some way for their gallant services.  What is rare about this case  is that we have the original signals received by Constance rewarding her for her most diligent duty in providing shore bombardment [NGFS -Naval Gun Fire Support]. Such a reward is known in the Navy as 'BZ', Bravo Zulu, which means well done. 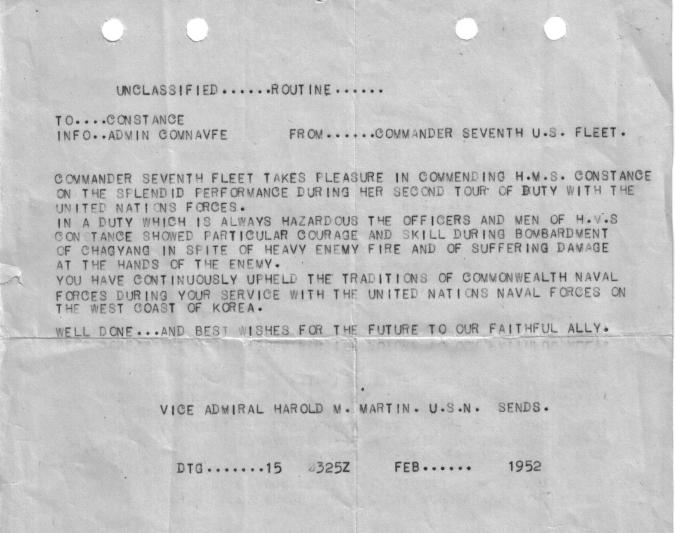 Simple documents I know, but words which should be kept [and shown] for posterity. 1952 is 54 long years ago.

These signals were sent to me by Kevin OCARROLL whose father served in this fine ship during the Korean War.