Not too long ago, whilst giving a lecture to a Royal British Legion Womens' Section gathering on the subject of HMS Ganges, I was asked why it was that there are many photographs of boys {?} in HMS Ganges wearing a cap tally which simply stated HMS. Several ladies in the audience were now a little elderly, and well remembered the WW2 days.

I told them that firstly, they were not boys but men, coerced for the war, known as Hostilities Only, and that secondly, the boys had vacated the Establishment in 1940 for the safety of the Isle of Man and an Establishment called HMS St George, which necessitated the boys wearing a HMS St George cap tally.

That led on to the reason for the HMS only cap tally, which was a device to deny the enemy, or the enemy's agents particularly the fifth columnists, from knowing the movement of British warships, all lower deck sailors being, for want of a better expression, "in the same boat." One lady delightedly suggested that that meant the Royal Navy had only one ship, a ship which was here, there and everywhere, and so omnipotent that it could, and did, destroy the German Navy.

The German Navy ? Yes!  And did they do the same thing, to hide their assets from us?

There was [and is] no simple answer to that question other than to say the German navy was in a state of flux led, not necessarily by a need to conceal its strength or numbers to an enemy, but by its constitution and power-sways. The Kaiser, Wilhelm the Second, was their last King [or Royal dynastic ruler] and during his time, German warships were prefixed with the letter SMS, which translated into English, meant His Majesty's Ship. Later on, during the time of the Nazi uprising specifically the installing of Hitler as the German Chancellor, German warship were prefixed with the name "PANZERSHIFF", but, when hostilities started for real [which was officially recognised as the sinking of the Royal Oak at Scapa Flow in 1939], the Nazi Party removed the prefix of Panzershiff, and replaced it with the one word [no prefix or suffix] of KRIEGSMARINE and all sailor cap tallies bore this one word. That very action can be equated to the British having the initials HMS.  In both cases, the proper name, class, disposition and whereabouts of any given ship was 'technically' denied to the enemy.

Here are two pictures of the cap tally worn by ratings of the "pocket" Battleship Graf Spee prior to her own early war engagement and her subsequent self destruction in the face of supposedly overwhelming Royal Naval asset at the River Plate. She perished with her sailors wearing the Kriegsmarine tally, although many in her wardroom were German High Sea Fleet officers and would have willingly opted to sport the SMS cap tally of yore, this, notwithstanding, the terrible crimes by the German hand in WW1 when the Kaiser was still in power.  I say this, meaning full well, that at no time, SMS {Jutland}, PANZERSHIFF or KRIEGSMARINE did the Germans as a surface fleet perform well, giving some [perverse] credit to the UBoats of the Kriegsmarine, who, although ultimately destroyed by a massive effort from many Allied air and sea resources, did run us a "merry chase" for survival given that we are an Island and need to control the seas to survive. 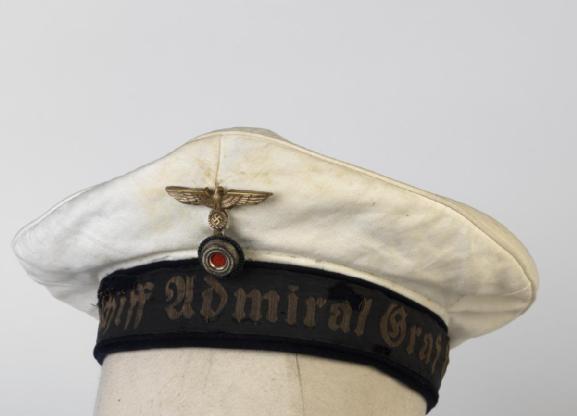 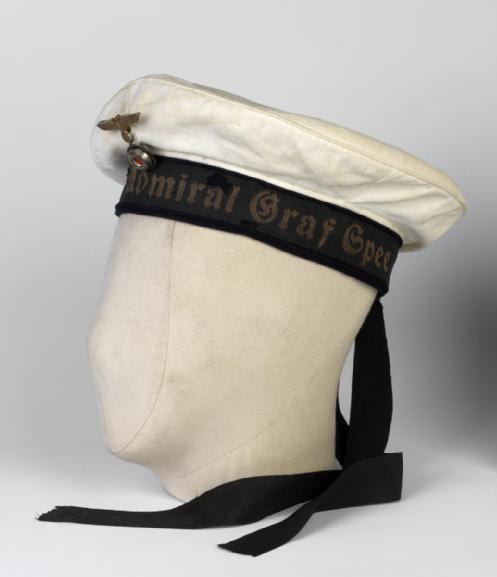 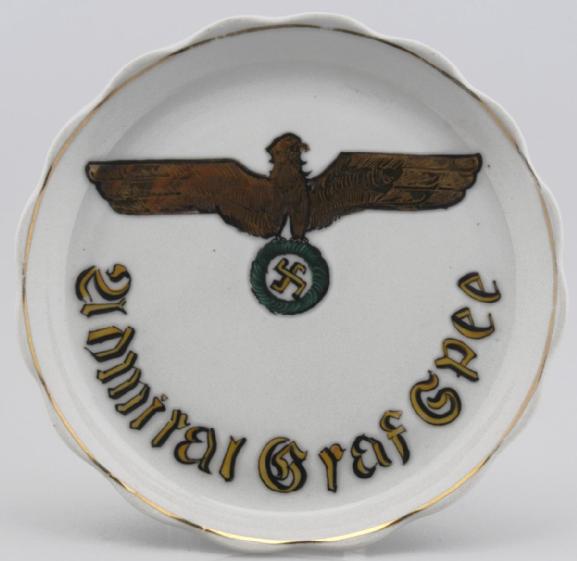 Then, I returned to my script, to my laptop and its projector, and to the stories of HMS Ganges, these, without the waffle or the lamp swinging!