The Royal Navy is without carriers and fixed wing aircraft and its other units are reducing in size.

The now demoted USA Economy from AAA to AA is having a rethink on Defence spending.

All European countries within the Euro Zone are pulling back from high profile Defence Audits [if they ever had one ?].

And now we hear that a country with the longest sea coastline on the planet has absolutely no submarines in commission.

All Canadian submarines now out of commission 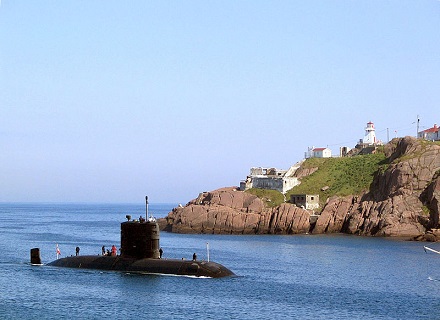 The navy’s last operational submarine is now sidelined until 2016, leaving the service without an underwater capability and potentially throwing into question the future of the submarine fleet.

The submarine program, which has already cost around $900 million, has been plagued with various maintenance issues that have prevented the boats from being available for operations on a regular basis.

A media report in July noted that one of the subs, HMCS Windsor, arrived in Canada in the fall of 2001 but since then it has operated at sea for just 332 days.

HMCS Corner Brook, damaged when it hit the ocean floor during a training accident in June on the West Coast, is now dockside. It will be repaired and overhauled during a planned maintenance period now underway.

But it is not scheduled to return to sea until 2016, the navy confirmed in an email to the Ottawa Citizen.

HMCS Chicoutimi, damaged by a fire in 2004 that killed one officer, still remains sidelined. That leaves HMCS Windsor and HMCS Victoria, which are also not available for duty at sea.

“The navy is focused on HMCS Victoria and HMCS Windsor and returning both to sea in early 2012,” stated navy spokesman Lt.-Cmdr. Brian Owens in an email. “Trials are already underway with Victoria in anticipation to her returning to sea.”

He noted that plans call for Victoria to do a test dive in the Esquimalt harbour on Vancouver Island sometime this month as part of a plan “to verify the submarine’s watertight integrity, and the functionality of other key systems.”

But defence analyst Martin Shadwick said the latest news on the four submarines is yet another blow to the program.

“All the arguments the navy made for having submarines 10 or 15 years ago are still fundamentally valid, but they haven’t been actually able to provide the politicians with specific concrete examples because the subs are not available all that much,” explained Shadwick, a York University professor. “That makes the subs a lot more vulnerable to budget cutters in the department and outside of it.”

He said the future survival of the submarine force could be put in jeopardy if the problems continue.

Canada purchased the subs second-hand from Britain and took delivery of the boats between 2000 and 2004. The navy said it did a thorough examination of the vessels to ensure they meet Canadian needs, but problems with the Victoria-class subs started materializing almost immediately.

High-pressure welds had to be replaced and cracks were found in some of the valves on the four subs. Steel piping also needed to be replaced as the submarines were put into storage in Britain with water in their fuel tanks. HMCS Victoria also underwent repairs after a dent was discovered in her hull.

In addition, there have been delays in installing Canadian equipment, such as the weapons fire control and communications gear. The subs are still not capable of firing Canadian torpedoes.

“The introduction of the Victoria Class has been fraught with many issues and faced a number of setbacks,” a May 2009 briefing note produced by the navy acknowledged. The Ottawa Citizen obtained that document through the access to Information law.

In July, media reports citing other navy documents noted the subs are also restricted in the depth they can dive because of rust problems.

In June, two sailors were injured when Corner Brook hit bottom near Nootka Sound, off the west coast of Vancouver Island. The boat was conducting submerged manoeuvres during advanced submarine officer training.

Owens said navy divers did an initial “in-water” damage assessment of Corner Brook. They found there was damage to the fibreglass bow dome, which Owens noted could mean that there may be damage to the sonar equipment it contains. There was also minor leakage in a forward ballast tank.

“The exact scope of the damage, and subsequent repair estimate, can only be derived after a more thorough assessment with the submarine docked and the development of complete repair specifications,” he added.

The cost of repairs is not known at this time.

HMCS Corner Brook is alongside the dock at Esquimalt and is being used as a training platform for submariners.

It is now undergoing an already scheduled maintenance regime in which minimal work is done, such as replacing certain components and doing an engineering survey of what needs to be done during a much more elaborate overhaul called the Extended Docking Work Period or EDWP.

The submarine will not go to sea again until after the EDWP.

Owens said Corner Brook’s EDWP is scheduled to be complete in 2015-16, making the vessel available for testing, trials and personnel training in 2016.

ADD TO THAT, this article recently published in the Edmonton Journal [Edmonton is the Capital of the Province of Alberta which is here


Even after being submerged for a quarter century, the words "nuclear
submarines" have not lost their power to make waves on the surface of
Canada's political waters.
Last week, Defence Minister Peter MacKay mused that in a perfect world, the
solution to our ill-fated diesel- electric boats would be the purchase of
new nuclear powered vessels capable of staying under water indefinitely.
After a few days, officials felt compelled to insist the Harper government
has no interest in going down such a road in the real world we actually live
in.
It's not difficult to see why. With the ongoing controversy over the F-35
fighter project and the recent announcement of $35 billion in contracts to
refurbish the surface navy, Ottawa doubtless felt that even musing about
another $10-billion addition to the national defence conversation - even
without the fraught word "nuclear" in it - would be political folly.
Just maybe, however, MacKay was on to something and the idea should not have
been dismissed out of hand. One of the arguments in favor of the F-35 -
Canada needs the best equipment for the task and the people assigned to it -
could easily be made about establishing an effective presence around the
arctic ice.
Furthermore, buying three or four Virginia-class attack subs from the
Americans at $2.5 billion apiece would be an excellent way to contribute
more to continental defence and to NATO's military capacity - common demands
from our powerful neighbor - without adding to our capacity to help with
dangerous, controversial military missions in the Middle East.
Finally, such a fleet might help greatly in reinforcing our claim to
sovereignty in Arctic waters. Sovereignty - especially in areas not covered
by international law, and without much human presence - is a rather
nebulous, use-it-or-lose it concept. That's why high-profile visits by U.S.
icebreakers, Russian submarines and Danish politicians (remember Hans
Island?) matter to official Ottawa as well as to ordinary private citizens.
The last time the notion of nuclear submarines was seriously considered in
this country was in the 1980s. A defence White Paper proposed the
acquisition of 10 to 12 small attack subs to patrol arctic waters; at the
time the U.S. navy was taking steps to boost its ability to make patrols
under the ice that Canadian authorities might not even detect.
But high costs, chronic budget deficits, enduring discomfort with the idea
of nuclear reactors and likely a Cold War hangover association with nuclear
weapons killed the idea.
The result has been a second-best effort in the north, to put matters
charitably. The most recent exhibit of the non-nuclear choice was the
Chrétien Liberals' purchase from the British of four used,
conventionally-powered vessels whose primary contribution to the country
ever since has been more economic - in jobs created by $900 million in
repairs - than strategic. So far the four vessels have relatively little
deployment to their credit.
In the last quarter century, of course, there have been vast changes in the
environment governing potential submarine acquisitions. New technologies
make it easier to monitor naval movements without getting wet, and the
shrinking ice coverage has reduced the challenge of staying under water at
the same time as it has boosted the challenge of monitoring commercial
surface traffic.
In addition, the cost of a nuclear submarine fleet would only begin with the
estimated acquisition price of $2.5 billion per boat. Maintaining the new
vessels would require the navy to acquire a vast range of new skills and
capacities Canada doesn't now have.
It might well be that the current idea under contemplation in Ottawa -
clubbing together with the Australians in the development and acquisition of
a new generation of conventionally powered submarines - is the way to go.
The point here is simply this: the conversation about Canada's submarine
future should be more open - and open-minded. The government's commitment to
the F-35 option first contemplated by the Liberals, now decidedly fraying
around the edges thanks to skyrocketing costs, is a textbook case of the
risks of stubbornness.
It would be interesting to see a report done on how the Mulroney nuclear
proposal looks now that we have the benefit of hindsight.
© Copyright (c) The Edmonton Journal