My job and intention here is to tell you something which is not common knowledge.  I will outline the 'skeleton' and leave it to a more competent body to put the 'meat on the bones'.

Please remember as you read this page that Lord Nelson, Captain Hardy and Tom Allen were all FREEMASONS !

Carers and Minders are the people who really get to know well their 'client', in some cases more intimately than do lovers or family members.

As in just about every case, now and in the past, we might get to know about famous 'clients' but never about their carers or minders unless they themselves were infamous or notorious.

Many years ago, one of my Christmas presents was Tom Pocock's book on Horatio Nelson, and like all his works, well worth reading over and over again - which I have done over the years. <Ref: ISBN 0 304 32240 7>

Tom tells the story of Lord Nelson's " LONG SERVING FAITHFUL SERVANT {his minder and oft times difficult to handle man, known in Georgian times as a "Body Servant"}, a guy called THOMAS ALLEN.  The duties of a "body servant" were many and personal, but one duty was not included in this case, namely that of steward. In a letter to the Reverend J Glasse in August 1805 who had asked Nelson's opinion of Allen's suitability to be a personal steward, Nelson says

"Although I kept him many years about me, yet I fear he did not make a very grateful return to my kindness to him; he never was my Steward nor do I think him able to perform such a service well

You will have gathered from that that Allen was no longer in Nelson's employ at the time of Trafalgar.  Why? That comes in a moment but even FREEMASONS fall out !

What tales that man could have told and virtually no trace of him in history whatsoever, juxtaposition with the countless mentions of Nelson himself. He would have done virtually everything for his master especially as we are often told of Nelson's chronic seasickness and incapacity because of his wounds. Allen was not a seaman [he was entered as such and was duly promoted to able seaman but he was a Norfolk landsman/labourer] and he was GREATLY STRESSED when he missed the Battle of Trafalgar and so missed Nelson's death. It is said that he MISSED HIS SHIP because he was INTOXICATED ! Nevertheless, despite his origins as a landsman, his experiences at sea and eventually his re-joining the navy after Trafalgar on the strength of that as a private sailor, allowed him to enter the Greenwich Hospital and it was later that Sir Thomas Hardy, Governor of Greenwich Hospital, 1834-39, formally admitted him as a Pensioner. Hardy had a monument placed over his grave in the hospital burial ground when he died in 1838, and there could have been no better fitting person to do this than Sir Thomas, Vice Admiral and Captain of H.M.S. Victory at the time of Trafalgar: Sir Thomas died less than a year after Tom Allen. This monument still survives to this day. He was aged 41* when Nelson died in 1805 [six years younger than Nelson himself] and died when he was 74.

* In actual fact he was younger but the records from the Greenwich Hospital, inexplicitly shows his DOB and therefore his ages throughout the story making him much older than he was.

This is a picture or a caricature of Tom Allen.

This picture was painted of him in 1832 at Greenwich by John Burnet.  It was purchased and owned by the Duke of Wellington, and like the last picture on this page, hangs in Apsely House - see details on last picture.

This is how the book makes it first reference to 'youngsters' from Burnham Thorpe - Page 101: 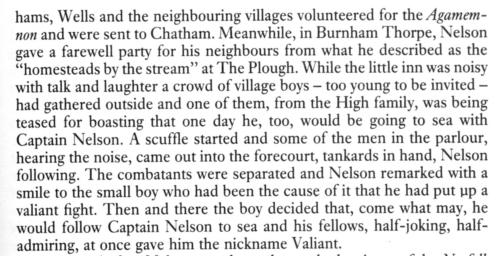 As the quotes above suggest, Tom was a pretty forceful character who took  it upon himself to be all things of service to Nelson, when many a senior officer would have had several servants, but none, I suggest, would have dared to tell his master to watch his drinking habits [for example] or assume the position of butler in the stately presence of the Hamilton's and other close aristocratic friends when clearly his social skills were obviously vulgar and lacked the sophistication necessary to assume such a duty. Tom appointed himself as Nelson 'right arm man' {pardon my dreadful pun} and took the greatest of advantages and liberties because he came from the same Norfolk village {Burnham Thorpe} as did Nelson, and, he was a fellow FREEMASON !

A few weeks ago [July 2010], whilst visiting Greenwich, my wife and I stayed overnight in the luxury De Vere Hotel at Devonport House. This hotel occupies the large red brick building immediately next to {to the right of the Maritime Museum} which was the old Royal Naval Hospital Greenwich.  Opposite, on the other side of the road, is the old Royal Naval College with its Painted Hall and Chapel, which is now part of the Greenwich University. For those of you not familiar with the area, first a map of the area, then a map showing  the key points for this story.

In the following picture [which really zooms in on the centre of the above picture] most of which is self explanatory, the main points for amplification are those in the front gardens {overlooking Romney Road} of the De Vere Hotel Devonport House. Most of which to be found in the gardens is well documented in many naval places, even though now, there is precious little. However there is one thing which isn't, anywhere, and for my money it is a very important piece of our history. To gain access to these gardens, one must take the route shown by the blue dotted line - there is no other access.  Staff in the De Vere Hotel will not see you enter their property for you will walk along the rear of the Hotel through the car park, so do not be afraid of making a pilgrimage.  The first and most obvious thing there is a large obelisk/memorial which on three sides relates the passing of the Governors of the Hospitals all of whom were famous admirals, which includes Vice Admiral Lord Collingwood second-in-command at Trafalgar. On the fourth face it reminds you that there are some 20,000 sailors under your feet who died at the hospital. Many were removed to a public park in Greenwich towards the Maze Hill area. The Mausoleum is obvious but access into the railed area is not possible and many of the memorials cannot therefore be read. There is a small obelisk over towards the dividing railings/Romney Road boundary railings which commemorates a brave naval officer. Then the jewel {the small stone on the map} and a finding I made quite by accident on a hot and barmy summers evening.  Back towards the left hand side of the front of the Hotel, by an established tree, there is a substantial stone standing all alone, approximately 1 metre high having four sides each 1 foot wide. As I passed it, I observed that the three sides I saw were blank with no marking of any sort. I made the effort of viewing the fourth side facing the Mausoleum.  There to my amazement and delight were the words commemorating Thomas Allen, Lord Nelson's life time servant. He was born in 1764 and died in the Hospital in 1838.  I commend this grave to you and hope one day that you will have the opportunity to pay your respects to this unknown but obviously important naval figure.

Despite a detailed search as to why Tom Allen wasn't onboard the flagship,  he wasn't with Lord Nelson at the end, in H.M.S. Victory.  We know that from contemporary records and because of the famous painting of Nelson's death in the cockpit of Victory attended by his brother officers AND his valet and steward [two people]. The famous painting which hangs in the Greenwich Maritime Museum was painted in 1807 by Arthur William Devis, and it shows his steward as being HENRY CHEVALIER and his valet as being simply GUITAN. Mind you, pictures then, as photographs today, could/can be manipulated and thus misleading, and Captain Hardy is shown centre background [with almost a white bald head] when in reality he was not in the cockpit at the time of death.

True to form, they too have passed into history as unknowns and they too could have added much to our understanding of history and in particular of Lord Horatio Nelson.

This picture hangs in Apsley House, Hyde Park Corner, its correct address being No 1 London, and a former home of the Duke of Wellington.

See also this page on my visit to Burnham Thorpe.  CLICK HERE.

And finally, the 'meat on the bones' I promised earlier. When you have read MY page you will know of this great character, but when you have read THIS page http://www.joadrian.co.uk/TomAllenStory.htm you will be au fait with his life.  I hope that you will agree with me when I say that it is a story all royal sailors should know about.