This little story is taken from the SHIPS MONTHLY magazine, a very important mail delivery event in my house. By the way, I am not acting on behalf of the publishers, but, if you are at all interested in what floats in the sea [ship-wise I mean!] whether warships, submarines, enormous passenger liners, even heavier crude and container carriers, small ships, of every nation, then this is the magazine you should read.

However, before I show you the "little story" I want to mention the following.

During a recent cruise to Russia [St Petersburg] and the Baltic Ports on the "Ocean Majesty" June 6 to 19, 2004, a cruise run by Page and Moy, we called into Oslo, Copenhagen, Stockholm, Tallinn, St Petersburg, Kalmar, through the Kiel Canal and the Amsterdam Canal to Amsterdam and home to Harwich our port of departure. We viewed this first cruise as a taster, but wondered whether we really should have been on a big and famous ship, with all the swank and panache such a vessel organically has.  Whilst transiting the water-way into Copenhagen early in the morning [0500] I was up and about the upper deck when I spied through my binoculars a familiar ship [familiar because living on the Solent, we see her and her big sister [QM2] and soon to be the Queen Victoria [QV], entering and leaving Southampton] namely the [QE2].  By 0700 she was about 2 miles ahead fine on our port bow, and shortly after, I realised that she had stopped approximately half a mile from the entrance to the breakwater and therefore about three quarters of a mile from an alongside berth.  We passed very close to her down her starboard side and entered the harbour berthing alongside very close to the centre of Copenhagen. When ahead of the [QE2] I looked back and saw that she was anchored using her port anchor. I also checked to see whether there were any obviously signs that she had just, a couple of weeks before, undergone a mini refit in Germany but my glasses found a couple of weathered rust marks forward on the bow. Wouldn't do in the RN you know.

Clearly, the draught of the [QE2] was too great to safely navigate the harbour, and her passengers had to be ferried in and out of Copenhagen, each leg of the journey taking up to half and hour.  I began to think that "small" had merits, and much preferred the short leisurely walk we had, past the famous mermaid on the rock, into town via the royal palace. We could come and go as we pleased.  This "big ship" problem was repeated in every port, not that they were anchored off all of them, but when alongside, their berth was a deep vessel berth [commercial docks] which were in the less attractive parts of the cities and a much longer walk from the touristy bits necessitating the use of a fleet of buses.  Still, although it is better to choose small ships for small ports, I still want a ride on the [QE2] or any of her big sisters at some time in the future.

We can however claim an association with the [QE2] that came about from a funny, if not ridiculous event.

I have adequately described the berthing plan of both ships visiting Copenhagen, although I have not mentioned that some distance astern of our ship, was a landing stage being used by big ship ferrying boats.

One elderly lady from our ship had travelled ashore by foot and unaccompanied.  On her return from the city, she got it into her head that she should board a ferry to be taken outside the breakwater to her waiting ship and duly arrived at [QE2's] sea ladder. During this period we were doing a head count whilst singling-up ready to proceed to our next port. Naturally, we were one passenger missing, but the ship would have to continue on its way catering for the other 500-odd passengers and not to the one passenger missing. Meanwhile, the elderly ladies disorientation had caused suspicion in [QE2] and they pinged that they had one too many passengers. We slipped and proceeded out of the breakwater and turned sharply to starboard heading for the Baltic Sea, in effect leaving Copenhagen via a different direction to that entered and therefore opening the range between ourself and the [QE2] still at anchor. At the appointed time and now some distance from Copenhagen, the pilot boat came alongside to take-off our pilot, and guess who was in the back of the launch?  Yes, one little old lady. How they got her onboard I will never know, and the way our crew had to drag her inboard from a rocking small boat which the young and agile pilots are used to jumping from and on, must have resulted in severe bruising. We arrived in Stockholm with a complete manifest, and again, had an excellent near-city-centre alongside berth. Poor old lady, although she had for a few hours sampled the good life onboard the magic [QE2] - more than what I had!

The "little story" which follows is a history maker, and a delightful tale of Britishness [that's the old type and not the new type which we regrettably have to accept!]. The picture says "QM2 and QE2 berthed in New York etc" but I am reliably told that it should read "New York - QE2 berthed and QM2 going astern ready for a mid-river position: see text - Concorde nearby" 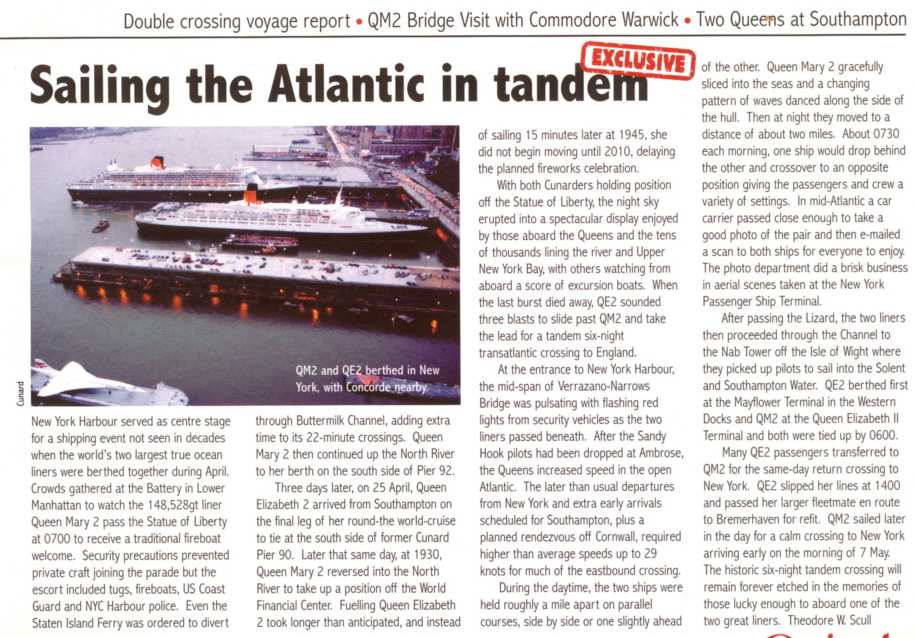 This next article brings you up to day [July 2004 edition] on other matters concerning the great Cunard liners. 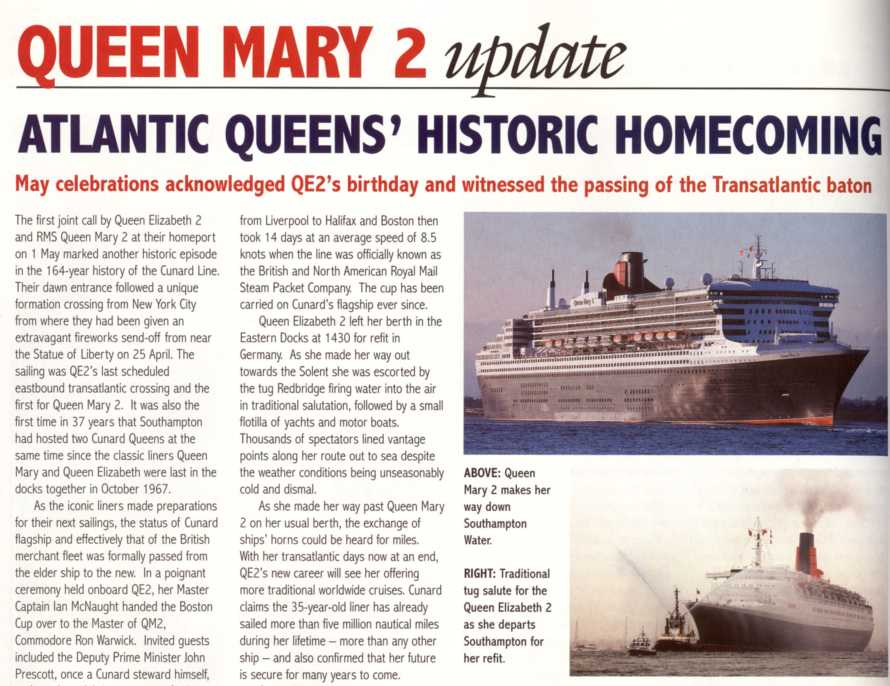 See also on my site the following page http://www.godfreydykes.info/bits_and_pieces_volume_v.htm#7.