TIME LINE IS NOW 18th September 2016 and many years since I wrote this story. The time is now right for an update!

My wife and I, fed up with the heavy nausea extant in airports around the world and seemingly the eternal threat of being killed by terrorists of many organisations, decided this year to take our holiday in Northern Ireland and to do some serious research into this erstwhile troubled land, now, and fortunately, rapidly becoming a place of peace complimenting the sheer beauty of this province.  I HIGHLY recommend a holiday there taking the culture trail with so much to see and learn about, that there is little time left in a two week stay to tarry-a-while drinking Guinness, although an evening [or two] is to be recommended to wander into select pubs to listen to top-of-the-shop Irish folk music.

Based on our wanderings, I am now in a position to post some changes to my original text.  Hope that it all makes sense without altering the reason for my page over much.

To start off, scroll down a wee distance [as paddy would say] to "You can't 'seafarer than that' below.

Hello and welcome all.

This story is not necessarily about BELFAST Northern Ireland, nor of its people good by and large though they are, but about a spirit of the Royal Navy [which many mainland cities do not, nor ever have had] which transcends the proverbial bad and evil things we view on our television screens about that City and the Province, by  putting  the Royal Navy in the forefront of goodness, respect and profound reverence for one of the Royal Navy's world war two hero's.

The men of the Royal Navy of the City, have achieved something not thought possible, and certainly out of the question in the recent years of in-fighting in this fair and beautiful City.

At a time when Peter Hain MP, Secretary of State for Northern Ireland, is trying to hold the warring factions at the peace table together and endeavouring to rid the bigotry from within the souls of the politicians from both sides of the divide, it looks like once again, the trouble are brewing, and the pots which hold this malevolent cocktail are moving from the back-burner bit by bit towards the front-burner.

The divide, at least for people on the UK mainland, is taken to mean the IRA [in all its forms and groups] against the LOYALISTS [in all its forms and groups], but, on Saturday evening, the 10th September 2005, the enigma which is Belfast was never more evident when BBC television showed the City taking part in the 'Last Night at The Proms' [an opportunity to show ones fierce loyalty for the Crown], whilst brewing around the corner were the recalcitrant Orange Men, and yet, in a near by church, the men who fought for our British Crown, were celebrating or commemorating the 60th anniversaries of VE and VJ day to remember the thousands of men and women from the Province who gave their lives for their country. I dare say, that in the first two groups those taking part were mainly [if not all] non-catholics, but in the later case, not so!

Now I am sure that you always watch the 'Last night';  that you are sick and fed up of hearing about people who put other people in harms way in the City and elsewhere in the Province, so that leaves just one story, and I can assure you that it is worthy of being told.

Embarrassed though he may be, there is a man in Belfast who more than most by his personal actions, research, writings and lobbyings, has revered the memory of James Magennis VC is a most concerted effort, not only doing long overdue justice to James's memory, but bringing upon himself, great credit, for, in short, the name Magennis, as a war hero, was virtually lost for all time.  His name is George Fleming.  George is an ex Ganges boy [just like James], and an ex submariner and because of his sheer commitment to his subject, he was able to write a book, get a permanent statue mounted at the City Hall in Belfast, and now, though I am not sure whether or not he was the protagonist in this matter, the following event manifest in the text and pictures which follow. James lived to collect his VC personally from the King at Buckingham Palace so his life was not destroyed in the Service of his country, but his life subsequent to that was destroyed nevertheless by bigotry and other circumstances, some of them, true to say within James's control, whilst many others were not. It is touching and commendable that George should spent much of his time making sure the memory and deeds of James live on for all to see and to read, and that to me is worthy of that time honoured R.N., accolade, which is BRAVO ZULU George, you are a bloody good shipmate and we are proud of you. See also this page SUBMARINER VC HOLDERS.

The following text and pictures tell their own story. Difficult for us UK mainlanders, but remember Loyalists/UFF are, dare I say it, protestants, so this move is indeed special and to me, a gesture which bodes well; let us all hope that this is more than a 'passing fancy'.

You can't 'seafarer' than that!

[new text to amend the title above] - well, a visit to the site suggests that this statement is wrong? Imagine travelling along a quiet and generous roadway on the side of a small hill, almost immediately opposite a large hill [approximately 1 mile distant] on top of which is the Stormont, Northern Ireland's seat of Parliament. This is the Kings Road, and here you will find a long low block of flats [left or right depending on the direction you are travelling of course]. Stop outside the block or in nearby side roads [tons of slots available] and get out of your car. Wander over to the iron railings which surround the front of these dwellings and look for numbers in the 200 series [presumably Kings Road numbers] specifically No's 250 and 258 [adjoining]. On the gable end of 250 is this huge mural:-

this is a thumbnail, but the big picture I have left VERYBIG for you to get a good look involving the use of your scroll bars. NOTE. When you open the thumb nail you may get a magnifying glass symbol on the enlarged picture. Click on the cross inside the magnifying glass to take the picture to a full sized experience.

Just a few meters distance on the gable end at No 258 is this equally huge mural:-

It too provides you with an excellent view once the thumbnail has been clicked.

Now it might have been the case that both gable ends had UFF murals, so in truth only one was over-painted, but the other UFF murals is still VERY close by still with its grisly message.

[Now new text to add to the overall story].

The City Hall memorial to James mentioned below is a sight to behold. Here, a picture saves a thousand words [as the saying goes]. It stands on the lawned area immediately in front of the City Hall and over to the right as one looks at the Hall.

In this set of five pictures [varying sizes for clarity] you will see that the memorial has a sandstone cap, a bronze collar, then a sandstone pillar, a concrete boot and a marble base. 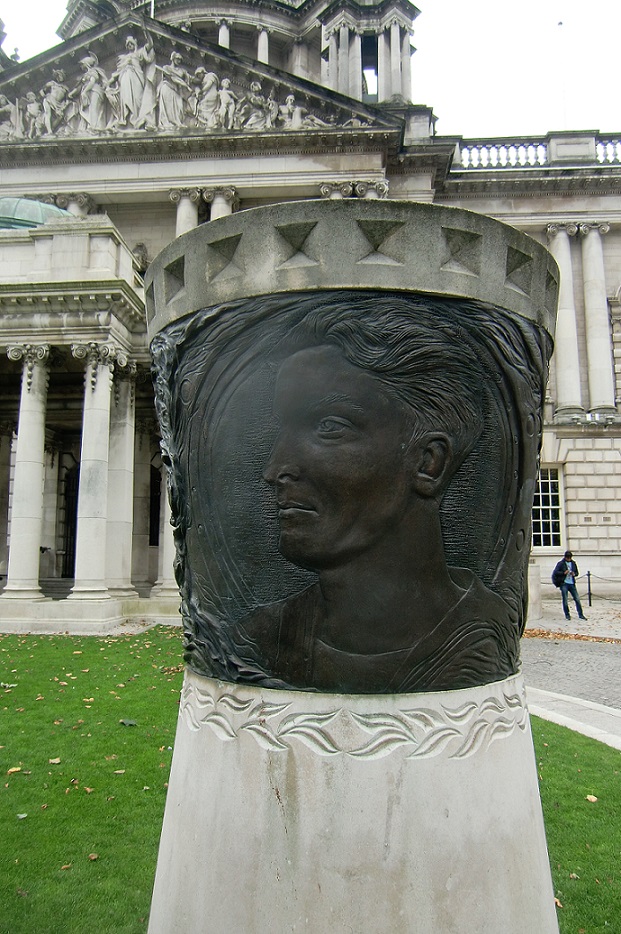 The purpose of this picture was the bronze plaque, but my wife tucked a poppy under the concrete boot as a mark of our respect.

That folks, concludes my update. Thank you for viewing it. Goodbye.

A MURAL dedicated to the UFF has been removed in a loyalist estate - to make way for a giant painting of a CATHOLIC war hero!

The new mural was painted by artist Kenny Blair as part of celebrations to mark the 60th anniversary of the Allied victories in Europe and the Pacific.

Its unveiling was attended by a host of VIP guests representing the UN, Royal Naval Association, British Legion and the Submariners Association.

West Belfast-born Magennis (pictured) won the Victoria Cross - British highest military decoration - for an incredible act of bravery during a mini-sub attack on the Japanese warship Takao in Singapore harbour in 1945.

Magennis and three colleagues evaded enemy defences to steer their midget sub under the 10,000-ton vessel and attach mines to it.

Magennis made a second dangerous dive in the freezing waters to free the snagged containers holding the limpet mines.

When Magennis returned home he was feted at Buckingham Palace, but became a shuttlecock in Ulster's great divide.

On his return to his old school, St Finian's on the Falls Road, pupils refused to stand for a "Brit" hero.

Magennis eventually settled in his wife's hometown of Bradford and lived there until his death in 1986.

The story would have ended there but for a campaign orchestrated by George Fleming, who wrote a book about Magennis' remarkable exploits. He eventually persuaded councillors in Belfast to erect a 6ft-high monument at the City Hall in memory of the only man from Northern Ireland to win a VC.

George, an ex-sailor, attended the unveiling of the Magennis mural and admitted: "It's wonderful to see this here. It shows courage crosses all boundaries and I think it's a magnificent gesture by the good people of Tullycarnet."

Loyalist Commission member Frankie Gallagher said: "The story of James Magennis - who lived in east Belfast for a time - is a fascinating one and this mural tells it brilliantly.

"We've removed all the other murals, too, and the one it's replacing is the UFF 'grim reaper'.

"This is part of a five-year strategy for the Tullycarnet estate to address what is the fourth-worst education attainment level in Northern Ireland.

"It is vital, and the children themselves will be building a memorial garden at the site in the near future."

In these pictures 1,2 and 3, George is LEFT, SECOND LEFT, and dont know?

OUT OF THIS MAJOR UK CITY COMES GOOD NEWS, GROUND-BREAKING NEWS, AND IT IS ALL TO DO WITH THE ROYAL NAVY. WELL DONE TO ALL THE NAVAL VETERANS INVOLVED AND THANK YOU FOR BRINGING CREDIT UPON THE SERVICE WE ARE ALL VERY PROUD OF.