FOUND IN A JUNK SHOP

I came across this record card whilst browsing in a junk shop looking for naval artefact. This simple piece of semi-stiff, buff coloured card, tells the story of a Royal Naval sailor from the beginning of 1902 until being demobbed [released] at the end of 1944, covering both the 1st and the 2nd world wars. 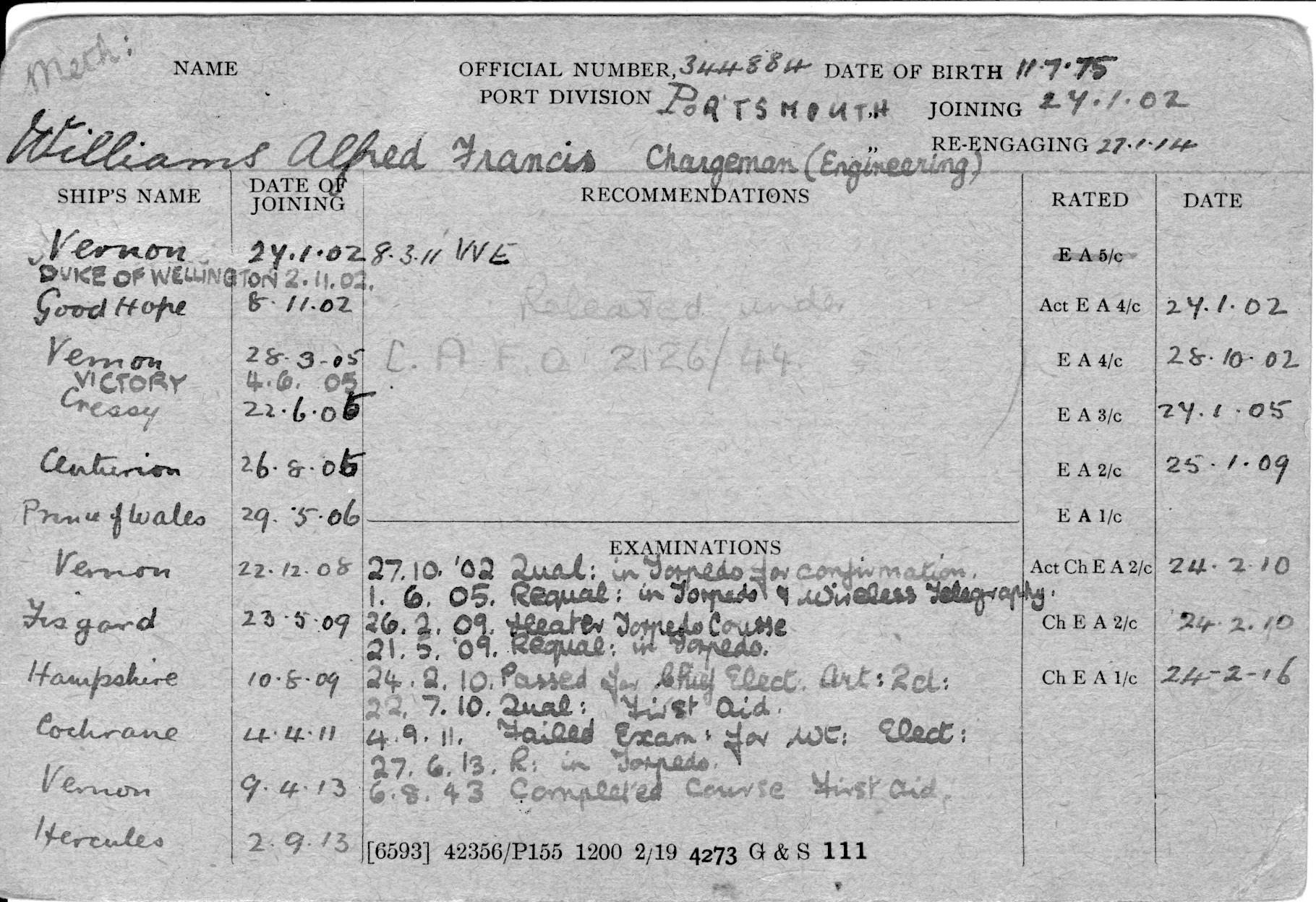 On the front of the record card, at the top, we see that he is a Methodist; his name is Francis Alfred WILLIAMS; born 11th July 1875 and Joined the Service on the 27th January 1902 just missing the Boer War.  Thus, he was 26½ years on joining, quite old and by that age, probably a trained electrical engineer in civil life.  Have a look at this link [and to the others in my series of the RN Warrant Officer - Parts 1 and 2] which tells of  the needs of the navy in attracting skilled engineers:
THE ROYAL NAVY WARRANT OFFICER PART THREE
The navy would have been an attractive option offering things, especially post 1903, which civilian firms could not match.

His Official Number [344884 - note 6 figures] comes from a block of numbers allocated to Artisans and Artificers which I cover in my story of Official Numbers which can be found here RN OFFICIAL NUMBERS [RATINGS]. He was a Portsmouth rating.

He re-engaged on the 27th January 1914 {as the 'war clouds' were gathering but not yet broken} after his first period of 12 years when aged 38½ years and served until after WW1 leaving in June 1922 [see reverse of card below,  which will be discussed in full later on].  It is highly probable that men whose time was due to expire just as war was about to break would have been retained for the duration, hence the extra eight years he served on top of his twelve: 20 was an odd number of years to serve but he was awarded a pension of sorts when he was 47 years of age.

Behind his name he is shown as a "Chargeman [Engineering]" and that is almost certainly his former civilian employment title.   If you look at the fourth vertical column headed "RATED", you will see that he joined as an Acting Electrical Artificer 4th Class [1902] and in the middle of WW1 just before The Battle of Jutland in 1916, he received his final promotion to Chief Electrical Artificer 1st Class.

The first two vertical columns show the ships/shore establishment [barracks and training] he served in from joining until the 2nd of September 1913 when he joined the Hercules in which he served until 17th June 1919 and she was heavily involved at Jutland.  See the following text

and note the 1st Battle Squadron.  HMS Vernon is mentioned four times, and this was the alma mater of all things electrical be they wireless telegraphy, high power/low power electrics, torpedoes, gunnery servo's etc etc.  His basic training on joining was done here and his other visits would be for courses and probably as an instructor himself.

In the centre vertical column, the third from the left,  the top part "Recommendations" tells us that he was released [a second time from his service in WW2 - more to follow] under Confidential Admiralty Fleet Order [CAFO] 2126 of 1944. The other entry in this part, namely "8.3.11 VVE or WE" is cryptic.  The bottom section "Examinations" confirms that he was an electrical specialist [not an engine room man], but more importantly, that he was a pioneer almost at the very beginning of the science. Although the entries are easy to read, I will explain his training as listed - there are nine entries and I will number them with a red coloured numeral. His basic training took place in HMS Vernon commencing 27th January 1902 when an Acting Electrical Artificer 4th class and nine months later, [1] 27.10.02, he QUAL [qualified] in Torpedo for his confirmation to Electrical Artificer 4th class recorded on the right on 28.10.02  [2] On 1.6.05 he Re-qualified in Torpedo and Wireless Telegraphy [3] On 26.2.09 took a Heater and Torpedo Course [4] On 21.5.09 Re-qualified in Torpedo [5]  On the 24.2.10 he Passed for Chief Electrical Artificer 2nd Class, and over to the right shows us that he was promoted to be an Acting Chief Electrical Artificer 2nd Class on the same day [6] 22.7.10 he Qualified in First Aid [7] bad news came next because on 4.9.11, our man failed his Warrant Officer Electrical Examinations [8] On 27.6.13 he Re-Qualified in Torpedo [9] On 6.8.43 [to be covered on the reverse of the record card in a moment] he Completed a First Aid Course. 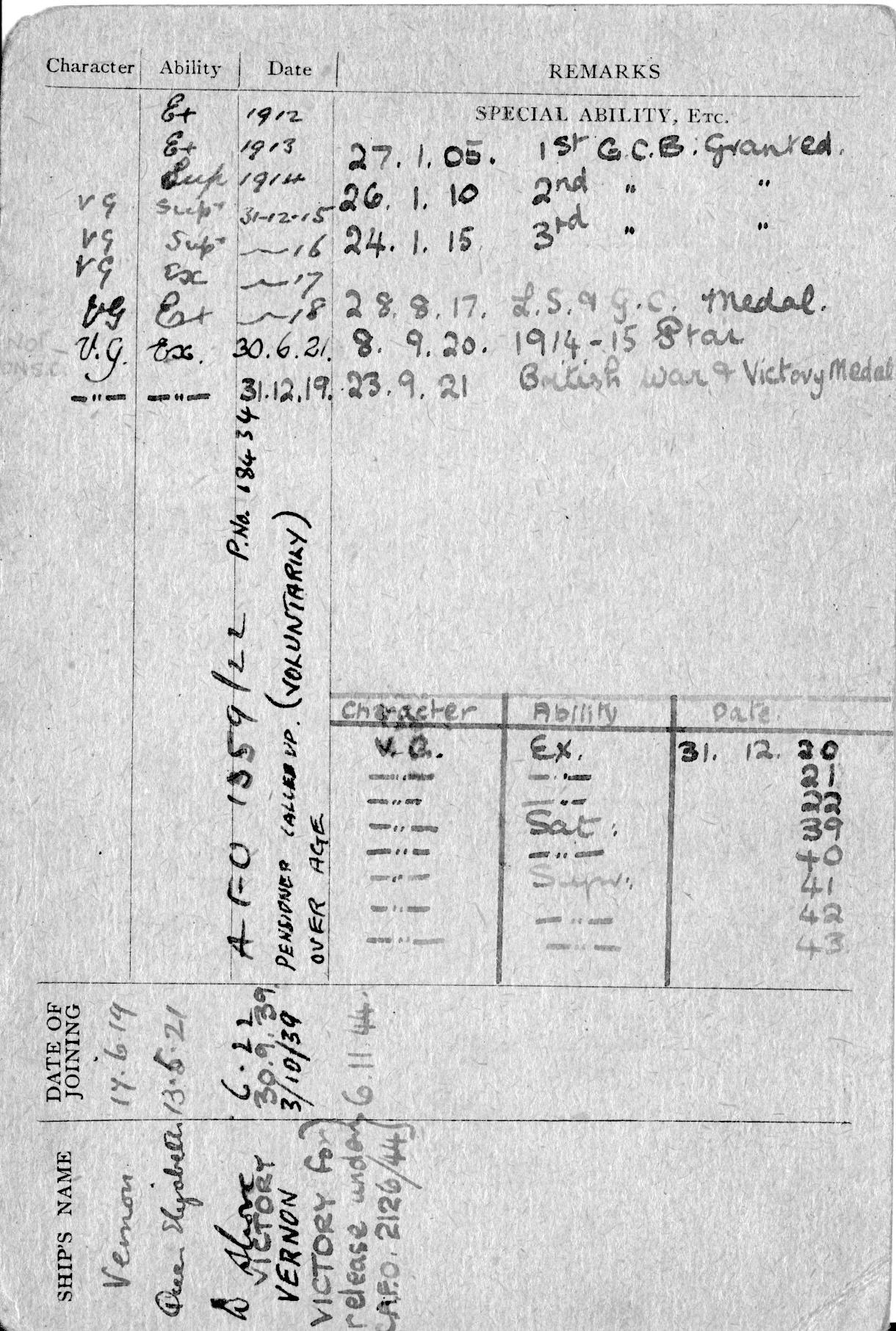 The picture to your right now is the reverse of the card. The top part shows his Character Assessment and his Efficiency [Ability] at the Rate held at the end of each year on on being discharged.  Here you can see that he held continuously the VG [Very Good] assessment which nothing transcends.  Efficiency assessments do go up and down for various reasons most of which a rating cannot control.  A typical change, manifest in his career pattern, is that as a Chief Electrical Artificer 2nd Class [say] he could be assessed as 'Ex' [Exceptional] but when first promoted to a 1st Class Artificer, he will be either Sat [Satisfactory] or Supr [Superior] in that new rank, but not yet Exceptional.  From 1912 until 30th June 1921, this man was awarded 5 Exceptional and 3 Superior assessments - very commendable. Over on the right hand side column, under "Special Ability" we see his Good Conduct Badges, often wrongly referred to as stripes. Each of these GCB's [to a maximum of three] is awarded for four years mans service from the age of 18 or from the date of joining if older than 18 on entry. The dates shown do not seem to fit into the pattern I have describe which was certainly extant at this time. His first badge should have been awarded on the 27th January 1906, the second on the 27th January 1910 [but we can except the 26th as stated], and the third on the 27th January 1914, the day he re-engaged after his twelve. He was awarded the Long Service & Good Conduct Medal [LS&GC] on the 28.8.17, this being seven months later than the norm which is 15 years from the age of 18 or later etc. So, all in all, a bit of a shambles.  His WW1 medals accord with the norm where three were the maximum [see my page RN Signal Schools and read about these totally hapless men and medals].

Next comes text running north and south [vertically]. The top line "AFO 1359 etc" except for the "P.No 18434" entry, should be read in conjunction with the bottom two horizontal rows, one showing Ships Name and one, Date of joining, which are in continuation from the front of the record card. So, it tells one that Williams was "D.Shore" = Discharged Shore [for civilian life] in June 1922 in accordance with AFO [Admiralty Fleet Order] No 1359/22 which in all probability covered the rules for returning to peace time manning and how and when men who had been forcibly retained for hostilities should leave the navy.

The next part of the north/south text concerns friend Williams re-joining the navy to fight in WW2.  Again, in the Ships and Date rows, we are told that he re-joined at the very outbreak of war on the 30th of September 1939 at HMS Victory, the main Portsmouth barracks in Queens Street, now renamed HMS Nelson. However, within a couple of days, on the 3rd of October, he was drafted to his old alma mater HMS Vernon, where no doubt he spent the whole of his war years as an instructor.   His card is marked "Pensioner Called Up [Voluntarily] Over Age" and he was given the new number of P. [meaning Portsmouth] 18434.

To the immediate right of the north/south text is a table showing his Character and Efficiency for 1939 until 1943, adding to the same for the years 1920-22.

The final entry on the card, back in the bottom two rows, says that on the 6th of November 1944, he was returned to HMS Victory and released back into civilian life.  CAFO [Confidential Admiralty Fleet Order] 2126/44 probably stated that at the good old age [certainly in those days but fortunately not now] of 70 next birthday, he had done his bit for his country and deserved a rest.  Note, that he left the Hercules on the 17th June 1919 and that his last ship, joining on the 13th May 1921, was the battleship Queen Elizabeth.

From as far back as the Iron Clads in the 1860's, both ratings and officers had Service Certificates which followed them wherever they served in the Fleet or Navy at large.  Copies or extracts were made for official posterity, and the man was given his certificate on discharge for his own memories.  Many of the earlier Victorian Certificates were on parchment or waxed cloth paper, and I am the proud owner of one such wonderful piece of our naval history - see OTHER SAILORS IN THE FAMILY.   This piece of card was commonly used to summarise a mans past service career and to add to it, details of additional service which didn't involve the need to raise a new service certificate, and in its turn, it was given to the man for his retention on final discharge from the service.

We can be grateful that the card  was not ditched or otherwise destroyed, but how sad that it should end up discarded, unloved, not understood and probably not grand enough to be considered NAVAL HISTORY.