I was rather surprised when reading Jackspeak, that some NAVAL words and expression are missing, or are clearly wrong, and those only as far back as the start of the 20th century - not a long time ago!

Here are a few I would have expected to see.

1.    Leathernecks, were Royal Marines, before that, Jollies, long before the US Marine Corps was founded, and whilst they might have adopted that name post WW1, it was our Marines who were so called. They came to be known as Bootnecks and then Royals, although there is nothing to stop one using all or any one of these names. However, just like today, matelots is a general statement for sailors, amplified  {for example} by fishheads or skimmers, then too, the Marines, after leathernecks, were called bullocks or turkeys. In those days, warships carried two types of Marines. On the one hand, men from the RMA {Royal Marines Artillery} and they manned  one of the ships main armament pieces who were called BLUE MARINES {bullocks], and on the other, men from the RMLI {Royal Marines Light Infantry}, called RED MARINES {turkeys} took part in shore landing parties/ship boarding parties. Each type of marine corps had its own band and its own shore barracks - Eastney/Forton, which became HMS St Vincent. 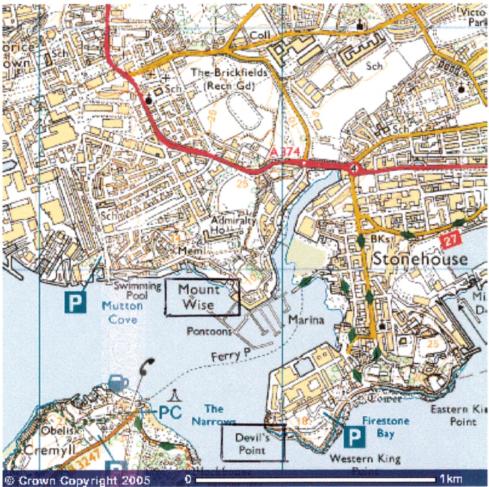 2.    Plymouth or Devonport  called GUZZ after a WW2 radio callsign.  Firstly, there never was a radio callsign GUZZ for anything in the RN, shore or seagoing. Certainly from the early 1920's, Plymouth had just two callsigns: one, at Devils Point was GYO and the other at Mount Wise was GZX - SEE MAP ABOVE.  Since radio was still in its infancy in those days despite Captain Jackson's experiments in the Diligence in 1898, any callsigns issued {SEE ship radio callsign system pre and post 1912} once issued, would have been kept to avoid confusion until communicators became fully au fait with the new fangled system. As time went by and both the RN and the MN grew in size, callsigns {3 letters for shore and 4 letters for ships} in the range GU** were issued to MN ships only, whilst GU* became the callsigns of civilian coastal stations around the UK. This was the case carried over into the 1950's.  By the late 1960's [1968] one, and one only, MOD ship had a callsign with GU** and that was the RFA Tarbatness GUAJ.  In the 1970/80's, several small warships were given GU** callsigns, and the nearest thing to GUZZ was the patrol vessel LINDISFARNE [P300] with GUYZ  closely followed by the sweeper BRECON [M29] with GUZA  - the frigate PHOEBE [F42] was allocated GAZZ.  Later, just after the end of WW2,  Plymouth's/Devonport's shore callsign changed to MTI - Plymouth's/Devonport's  Local Command Net [LCN] and the Devil's Point station closed leaving Mount Wise.  After WW1 two new events were introduced. First that ships and shore authorities were grouped into AIG's [Address Indicator Groups with a radio callsign] and second that shore naval authorities were given radio callsigns, but only to expedite the delivery of signals from sea in W/T format namely ACP 124.  These authorities did not use the callsigns themselves as they were assigned an MSO [Main Signal Office] only and not a W/T [Wireless Telegraphy] or V/S [Visual Signalling] office.  None of these callsigns began with the letter 'G' {or, but later on, the letter 'M'} and typical of these was perhaps the most famous, namely Admiralty {used before MOD[N]} which was 'HZKC' with S/M2 [Captain of the 2nd submarine squadron] for example as 'BSES'.  There were many hundreds of these authorities both home and abroad, sixtyeight in Portsmouth alone, and each had a four letter callsign which began with a letter other than 'G'.  Finally, Devonport was known as GUZZ long before WW2, and ask yourselves, which of the 50'odd shore authorities [WITH FOUR LETTER CALLSIGNS] in the Plymouth Command was nominated the callsign GUZZ [although NONE is the answer] but to make sense it would have to be either HMS VIVID which became HMS DRAKE or Captain Keyham Barracks [CBC] which became COMBRAX Devonport or ????? etc etc.  This entry comes from the "Plymouth.info/Royal Naval Barracks" website QUOTE Over the years there has been much debate about how or why HMS Drake gained the nickname of "Guzz".  During the 1970s it was revealed by a retired Royal Navy Wireless Operator that "GUZZ" was the call sign for the Wireless Station then situated at Devil's Point, Stonehouse.  UNQUOTE.  This revelation is nothing less than tragic for it has conned many generations of naval folk into believing his story and to say the least, it was a mischievous act of merely wanted something to say, regrettably the first thing that came into his head. The point to make is that Devil's Point was a shore W/T station, and all shore W/T stations from start to finished had THREE LETTER callsigns. This picture of callsigns [use your scroll bars] is taken from the 1930 edition of Indicatifs D'Appel. HMS Drake, as we all know is known as Jago's Mansions.

3.      GUZZ is called GUZZ for the following simple reason....full stop. Have a look at this page, and when read, click 'back' to return here to complete the read THE_PLYMOUTH_COMMAND

4.     Food. Today, we know what kidney's on toast is called, suet puddings in tin's and bacon with tomatoes and the juice therefrom swimming on ones breakfast plate, but do you know what "Schooner on the Rocks" was? This was the navy's name for Roast meat and potatoes. In these times, to supplement fresh food, sailors ate salt beef from tins.  This was called "Fanny Adams" by the navy, and come WW1 the army called the same thing "bully".  Later on, for all personnel, "bully" meant corned-beef in tins.  It was called Fanny Adams because she was a girl who was abducted, assumed murdered but her body was never found; it was believed that her body was cut up into small cubes and tinned ready to feed the troops.

5.    Other nicknames. In the early 1900's, as a carry-over from Queen Victoria's navy, Gunners were called "Blue Light" or "Wads" - Boatswains "Tommy Pipes" - Masters at Arms "Jawnty" but after a corruption of a French policemen, the Gendarme, and not as stated in Jackspeak - Bluejackets [sailors] were known as such, or of course as matelots, but also "Flat feet" - and sick bay tiffies [SBA's] were known as "Poultice Mixers".  Anybody called WATSON were nicknamed, not soapy, but "Chumpy" - those called GREEN "Shiner" - those called ENGLAND "Nutty" and the few called GENTRY "Dewbin".