This is a picture of HMS Powerful a very famous British warship [cruiser] for its involvement in the Boer War and the relief of Ladysmith.  What she and HMS Terrible did was near on impossible and the act was commemorated for many years with the RN Field Gun Competition at the Royal Tournament in London's Earls Court. RN Field Gun competitions are still staged, the most famous being the Brickwoods, performed once a year at HMS Collingwood now open to all comers including submarine crews and tri-service crews.  In 1975 [forty years ago as I add to this page] I was involved in HMS Mercury's Brickwoods field gun team running against many other Portsmouth Command Establishments, as "The Field Gun Officer". In this supportive picture of front rank dressed in blue uniforms personnel [four in number], is, from left to right my names sake, K1, Lieutenant Commander John Ewart Dykes R.N., the CO Captain D.A.P. O'Reilly R.N., a most likeable and august man; John [Ginger] Wingate the Establishment's Gunnery Officers and bringing up the rear, me. Of course it would be wrong not to mention the men who "oiled the wheels in terms of commitment and personal physical excellence", and sadly my memory recall is lacking, but I do [and did] admire Lenny Price, who went on to become a Warrant Officer in the W/T Branch, a par excellence hands-on trainer of the Mercury boys, overseeing a creditable performance. 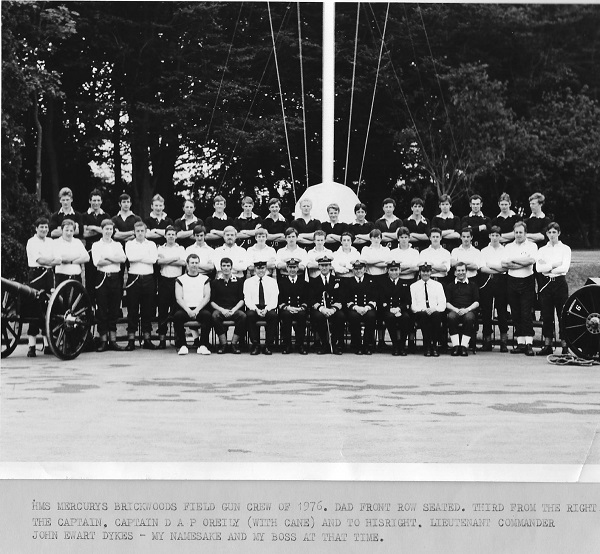 He is shown to the left of John Dykes in white-shirt rig.

Powerful was one of our ships which saw the introduction of wireless telegraphy although she was not fitted with it at the time of her involvement in South Africa in 1899 for the Second Boer War. However, the navy did have three W/T sets available in South Africa and they were pleased with their performance whereas the army failed to use theirs operationally. This file 1900 five.pdf shows that the Powerful was in the Reserve Fleet in 1900 and was earmarked for a W/T equipment fit. In 1919, Powerful became a part of the Boys Training Establishment at Devonport [HMS Impregnable] and in 1929 was sold for scrapping.

By the turn of the century, and well before all ships were fitted with W/T, many of our warships had been allocated with VISUAL CALLSIGNS. These all began with the letter 'G' and were groups of four letters.  From early into the 20th century, RADIO CALLSIGNS were beginning to be assigned but these began with the letter 'S' and were groups of three letters. Thus warships fitted with W/T had two callsigns and they were issued in different documents. I have mentioned the subject of RADIO CALLSIGNS on this page ship radio callsign system pre and post 1912.

The callsign books were issued frequently and here I will show you the 1906 version kindly sent to me by Sandy McNab an ex RAN communicator. Note that the Powerful's V/S callsign was G.T.F.B.  However, six years later in 1912 it had changed to G.T.D.S., and Powerful was in the Australian Squadron - see BRITISH_AND_COMMONWEALTH_ARMED_FORCES_CALLSIGNS_1912_TO_1967.  It is regretted that the quality of the first page in particular is not good but with the correct setting on your pdf zooming tool you should be able to read it satisfactorily.  Note the line of text immediately above the callsigns which says " THE ENSIGN TO BE SHOWN AT THE PEAK, OVER THE CODE PENNANT, WHEN SIGNAL LETTERS ARE HOISTED".

The 'Dolphin' and the 'Mercury' are both listed and these ships together formed the first submarine squadron/base in Haslar Creek off Fort Blockhouse [under army control] which became HMS Dolphin ashore in the Fort.

A new Royal Yacht [Victoria and Albert] was given the callsign G.V.J.S which replaced the 19th century Yacht of the same name.